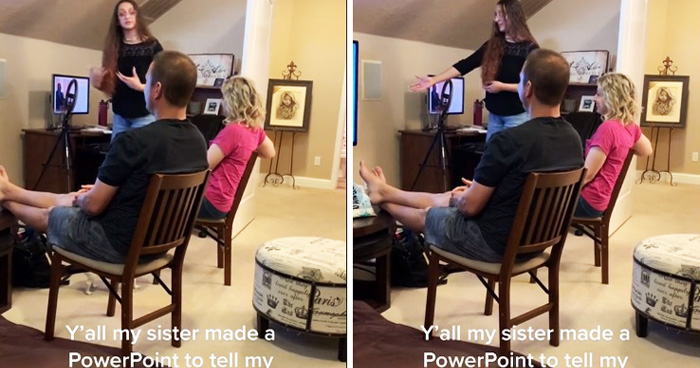 Millions of people have rushed to TikTok to watch Lexi’s PowerPoint presentation titled: “Today I Reveal To You A Secret,” which she used in breaking the news of her Stripper profession to her parents. As seen in the TikTok clip shared by her sister, Sami, the Portland-based scrolled through her presentation as her mom and dad sat and watched calmly.

Sami shared a clip of her sister Lexi using a PowerPoint presentation to tell her parents she’s a stripper.

Lexi stood before her parents and said: “This secret pertains to my life and doesn’t affect anyone. The only reason I’m sharing is because I want the people I love and trust the most to know what’s going on in my life and be a part of my journey. What the secret does mean: I’m talented, I’m cool, I’m powerful.”

The video was titled: “Today I Reveal To You A Secret.”

@lex1898 is WILD Jokes aside our parents are the literal best, my mom said “I’m surprised how proud I am” ##hotgirlshit ##getthatbagsis

“What the secret doesn’t mean: “I’m pregnant or in danger. I’M A STRIPER! As in, I pole dance at a strip club, and I love it,” Lexi announced. Before her parents could utter a word, the 22-Year-Old flipped to another slide, where she answered a few frequently asked questions that included why she has decided to pursue stripping and how she stays safe, among others.

After reassuring her parents that she is not pregnant or in any danger, Lexi revealed her pole dancing job.

She included a FAQs section in her presentation, explaining she’s not doing drugs or shady deals.

The first question, Lexi explained: “Well, it’s a sex-positive environment, and I can express myself through performance – the theatrics if you will.” The second question, she continued: “Well, you see there’s full anonymity in this club environment; you might not know how this works. The culture of strip clubs in Portland is very much sex-positive and very safe; there are no drugs or shady business practices that are commonplace or anything like that.”

At the end of the presentation, Lex allowed her parents to ask anything but was only met with positive reactions.

Below are the frequently asked questions Lexi gave answers to during her presentation.

“Is that why I’m able to suspiciously afford stuff?” “Yes, it is; I’m making monies doing that.” “Do I do any other kinds of sex work?” “No, all I do is dance, you see, I get to chat with people; there’s no other sort of things to it, really.” “Is it under-the-table income?” “No, I do pay my taxes.” After concluding her FAQs, Lexi opened the floor and her mom, a devout Christian, chipped in.

Many TikTokers expressed words of praise for Lexi and her supportive parents.

Her mom said: “I appreciate you are being forthright and sharing life with us, and I’m glad you feel powerful.” As soon as the clip landed on TikTok, the comments got filled with not only floods of support but applause over her parents’ unequivocal support. Taking to the comments, Lexi gave an update, and it read: “For anyone wondering, my dad’s only question was, how much money are you making? They’re seriously the best and earned the trust and respect we share.”

Lexi, the Portland-based gave an update about her dad’s reaction and it reads: