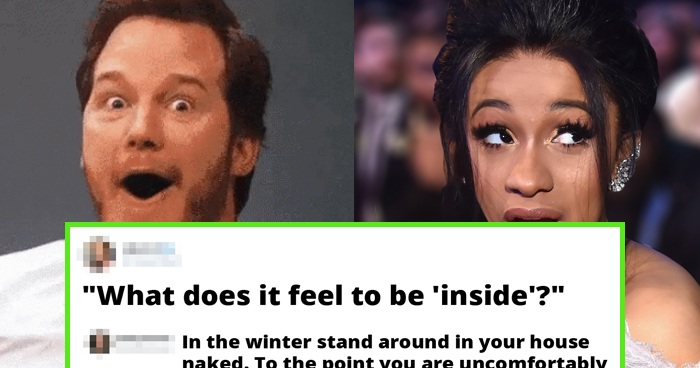 Yes, these are the most awkward things that you don’t want to ask them face-to-face. Even for women who’ve spent years living with one, there might still be questions that can’t be casually asked. That is Reddit exists.

Jokes aside, when a Reddit user started an interesting topic from women, it was just amazing to see men actively partaking to answer them. Maybe it’s because the majority of users are men, which really helps. But the answers really do open some insight and satisfy curious minds, especially when they pertain to the private parts that not all sexes share.

“Do you feel it’s hard to cry or show emotion?” – MotherofFred
Answer: “It’s not hard to do, but it’s easy to suppress. And I hate other people knowing about it – it’s none of their business and nothing stinks as bad as pity!” – Keiretsu_Inc

“How much does height matter in attraction?” – Indyalways
Answer: “Preferences are there, of course, however as far as height is concerned it’s so so down below on the list. In a way that it’s practically impossible that I’d turn down a potential partner I’m otherwise very compatible with, solely because of her height.” – ThrowAwayTheBS122132

“Is it true you can’t be true friends with a female friend? I have couple best male friends, and we were truly good best friends. No other feelings But one of my friends who is male told me that there are no true friends between male and female. There’s always an underlying romantic attraction.” – laragobear
Answer: “Don’t trust any guy that says that. It means he isn’t your friend or just playing some bizarre “nice guy” game. Men and women can definitely be friends with no underlying attraction.” – DryBicycle

“What do women unintentionally do/say that hurts your feelings?” – tarenni
Answer 1: “Downplaying emotions, if a guy mentions their emotions to you it is usually a sign of trust.” – Bonn2
Answer 2: “Also, insulting men’s bodies (their height, weight, penis, etc.). It’s also toxic. Women have worse body image problems, yes, but adding to ours won’t change that.” – vayyiqra

“What does it feel to be ‘inside’?” – hakzeify
Answer: “In the winter stand around in your house naked. To the point you are uncomfortably cold. Then, pull a HUGE pile of clothes fresh out of the dryer and climb inside the pile.” – _KFBR392KFBR392_

“What does it feel like to run with no underwear on. Does it just flop around? Does it hurt? Does the bouncing get you hard?” – Jurazel
Answer: “It kinda flops around, it doesn’t hurt and the bouncing doesn’t get me hard.” – untakenname3

“What makes you want to commit (be exclusive, or get married) does it have anything to do with your partner or more of ‘I have to be ready within myself first’?” – Secretly_Uninhibited
Answer 1: “With my wife, it wasn’t knowing that I wanted her in my life, it was knowing I didn’t want a life without her in it. That was definitive, for me.” – 4bangeranger
Answer 2: “For me, it was needing to feel like I had personally matured enough to be committed, I didn’t want to commit to someone who was clearly ready to commit to me if I wasn’t ready and could somehow end up wasting their time.” – Langhof

“Do men like it when females (friend/girlfriend) tell you they feel safe around you?” – 2muddy2
Answer: “Very much so. If you want to make a man’s heart melt you tell him that.” – FTW_Studios

“What are some of your thoughts on girls making the first move?” – Ranagios
Answer 1: “I wish women would do it more.” – SOwED
Answer 2: “My first long-term relationship started that way in college. We had hung out and flirted a bunch, culminating in us watching a movie at her apt and her shoving me against a wall when I was about to leave afterward. It was a shock, it was a surprise, and I’ll never forget that night so long as I live. Girl nearly half my size just took her shot.” – stonewall386

“Does it bother you if a girl is smarter/prettier/stronger/makes more money than you?” – Shaeda03
Answer: “Smarter and stronger both make for an interesting person, so that’s fine. I couldn’t give two sh**s about money. But if a girl isn’t prettier than me – well then I just feel sad for her, because that is not a high bar to cross.” – ThePhiff

“Do y’all enjoy late-night chats as much as girls do or it annoys y’all if it’s very often?” – spillbeanss
Answer: “Sometimes my wife asks me about something I’m really interested in or passionate about late at night and I have to point out that she is knocking on the door of a 2 hour PowerPoint presentation and she’s got work in the morning.” – MisterKillam

“What are the big signs that a man is dangerous to be around, in ya’ll’s opinion? Like, the signs women might miss (either because we aren’t around when men in our lives display them or for other reasons).” – disguised_hashbrown
Answer 1: “Be very wary of anyone who isn’t respectful of your desires and boundaries. And run from anyone who tried to gaslight you.” – mooglinux
Answer 2: “Too clingy or they are a bit too controlling. Clingy can also be just an awkward guy so that’s a little harder. But if they try to control your every little move, then that’s a big red flag.” – OkieTaco

“How much does being punched in the b*lls hurt?” – Outline40
Answer: “It feels like something is trying to tug your guts out through your crotch. Like literally everything below your lungs is in a bag with a rope tied around it and at the other end is a roided out tug of war team that faces execution if they lose round. Heave. Heave. Heave. Heave. Heave… etc.” – DarthDregan

“How often do men want to be hugged? Does it feel clingy, if a girl offers it every now and then? – spillbeanss
Answer: “I don’t know how many guys I speak for but for me being hugged by a girl you’re dating or are close with is like getting permission to relax and be happy.” – Crionso