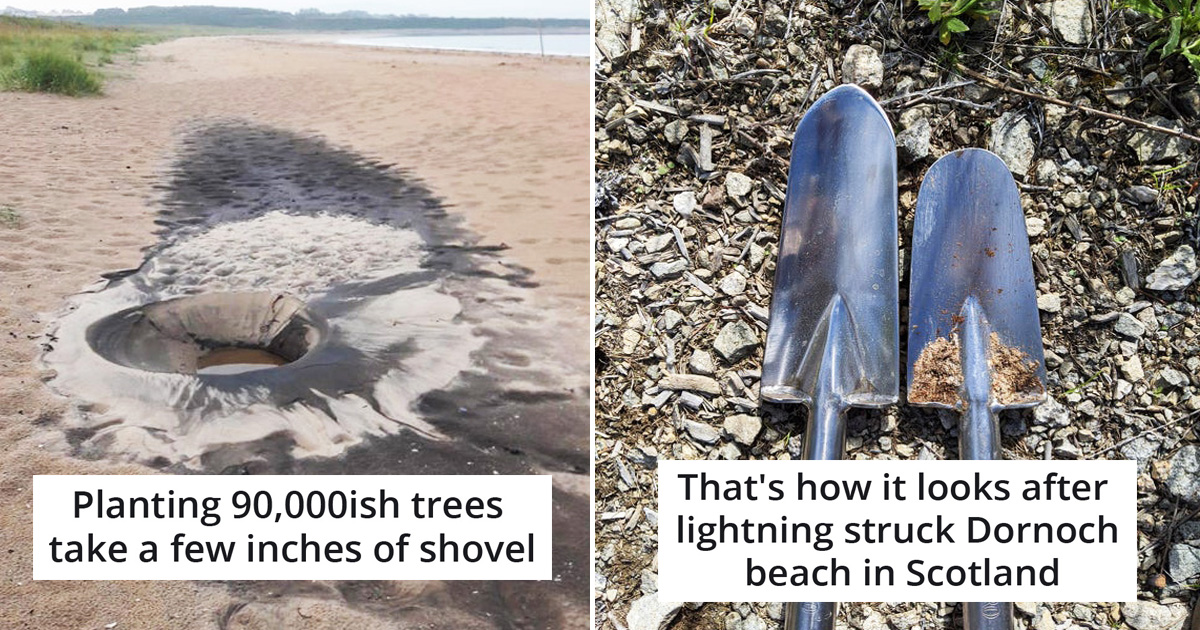 There is no better pastime than one where you spend learning interesting things about this world. The human brain was always wired differently from other creatures on this earth, always curious about things and asking questions.

The random facts often steal our brain’s attention because it can be akin to drugs for our thirsty brain. Instead of jumping into a dangerous journey of experiments, let these people answer your imaginations instead.

A long exposure photograph of a man swinging a string of glowsticks with burning steel wool on its end.

There was a lightning strike on Dornoch Beach in Scotland.

The fog and the wind turbines.

This black shirt was crammed in the back of the car for years and was exposed to sunlight.

This piece of wood was burnt with high-voltage.

The question of ‘what-if’ is one that scientists often began with. The question leads to experiments that yield answers, oftentimes way more than they expected. But outside the laboratory, human beings have always asked questions since they were just young children.

When you let a bamboo grow without direct human contact.

This tree’s roots in a graveyard found its way into a skull and grew inside it.

When a bear breaks into a car.

Simple rules of physics are often interesting enough to become an experiment subject for ordinary people. And even when experiments failed, they can lead to amazing results. When post-it note glue was accidentally found, the chemist failed to create a super strong glue.

This happens when an ordinary marble is flamed and then immediately dipped in cold water.

This flag at a golf course was strike by lightning.

I severed a nerve in my finger and now that part doesn’t wrinkle anymore.

The storm was so strong it picked up and moved the road.

The insect got stuck in the printer and was printed on the pillowcase.

Science is very interesting and in a real world situation, controlled studies don’t always show everything that explains a phenomenon. We never stopped researching and learning and figuring out the way the universe works!

Has anyone ever seen a polished coconut?

This phone vibrated when it was taking a picture of Chicago’s skyline.

Space debris impact research by ESA shows what happens when a 1cm sphere of aluminum crashed a block of aluminum at 15k Mph.

This soggy stump went through a hard freeze.

When you blink faster than the camera’s shutter.

When the same shovel is used to plant more than 9 thousand trees.

In cases of danger prevention warnings, such as not using water on oil, pictures like this show how a fairly easy situation can quickly go awry. Whatever kind of experiment you’re doing, always be remembered safety first! Also, now you know not to be curious anymore.

Someone added dish soap to a fountain.

The banana and apple were left in an office locker for over 6 months because of quarantine.

This coconut was left in a freezer.

My mom tried to disinfect the birdseed before putting them in the beanbag with the microwave. She accidentally made tiny popcorns.

Left this Play-Doh in its container for more than a decade and it’s grown crystals.

The pipes of this basketball court burst.

You can add blue food coloring in water for white rose.

Did you know that roses come in almost all other colors but blue? What many like to believe to be blue is actually because of the violet hue. There are no real blue roses, and most florists use dye. Twenty-years of genetic engineering could only produce a mauve-colored rose, never true blue.

Hair got caught in between zipper.