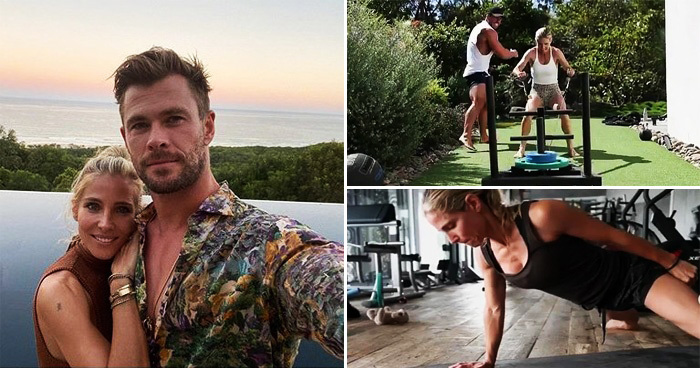 Those of you who’ve followed Chris Hemsworth for a while know that aside from ‘Extraction’ and his role as Thor in Marvel series, he is also a workout beast. During this pandemic, Chris has been promoting his workout sessions to help people stay at home.

But you might not know is that his wife is also a workout beast! Chris recently posted a video of his wife totally slaying it with a one-hand pushup, her coach, Ross Edgley, beside her.

Elsa Pataky, Chris’ Spanish wife of 10 years, was on a hardcore circuit of exercises from rope pulls, planks to rope climbing. Elsa is a mother-of-three and recently teased about her ‘badass’ projects. Her exercise regime right now is aimed towards that end goal.

While sporting a black workout wear, Elsa nailed her one-hand pushups amazingly. She was also doing a back training, her hair nicely tied behind her.

Her lockdown workout has been going so well.

Elsa may have a project where she needs to workout for, but she is hitting the gym really hard. Definitely an inspiring post!

Chris and Elsa got married in December 2010 just after 3 months of romance. The two have the same interest in working out and really hit it off right after they were introduced to each other during early 2010. They made their debut on LACMA even in Los Angeles.