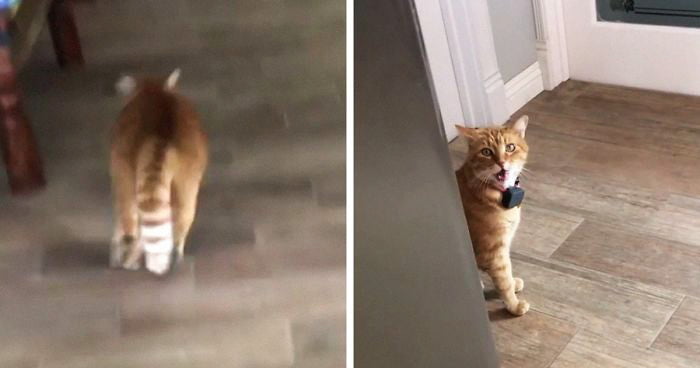 Cat Says ‘Well, Hi’ In A Southern Accent And People Loved It

Living with cats is full of shocking moments. At one point, they are portraying you as a slave and at another, they’re the one cleaning you up with hugs and affection.

Without a doubt, cats are a popular choice of pet and according to an American Veterinary Medical Association, more households in the United States are beginning to own more cats than dogs.

Hence, if you don’t have a cat as a pet, it’s best you start thinking of getting one, most especially as we are also about to introduce you to Gambino Bambino.

Yes, the 8-Year-Old Cat named Gambino Bambino has discovered a new way to surprise its owner.

Taking what appeared to be footage of the feline, Gambino was filmed running across the room before hiding in a corner. With its owner also going after it, they caught up with the little critter after which  Gambino raised its head and meowed ‘Well, Hi! In a Southern accent.

Gambino Speaking In The Video Below:

Nonchalantly grooming itself, Gambino’s video clip shared on TikTok has already garnered over 1.4million likes and over 11K comments, with many internet users trying to figure out what the Kitty was going to say next.