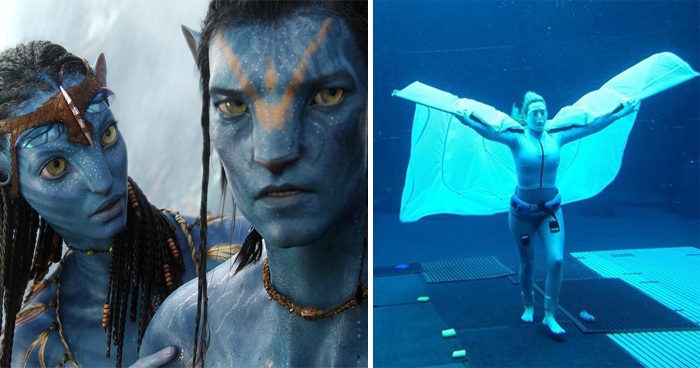 Actors and actresses often have to go really extra to portray their roles perfectly. For Kate Winslet, it was acquiring free-diving skills for her role as a ‘water person’ in the sequel movie of ‘Avatar’. Jon Landau, the producer of ‘Avatar’ and its sequels shared some behind-the-scene stills including Kate Winslet on her underwater scene.

Kate and James previously worked together on ‘Titanic’ which coincidentally had a similar pose to the still that was shared on Instagram. Kate’s cape beautifully floated behind her as she acted her role as Ronal. Joe captioned the post: “Wanted to share this photo of Kate Winslet after reading her interview in The Hollywood Reporter.”

The 45-year-old talked about how she had to learn free-diving for the role she was playing. After training she proudly shared her record for holding her breath underwater, “My longest breath hold was seven minutes and 14 seconds, like crazy, crazy stuff.”

She later revealed that she was playing a ‘water person’ and stopped herself from sharing more. Kate continued to share about the requirements that James put on her acting stars.

She also shared her reunion back with Jim, “It was so wonderful to work with Jim again. Time has changed him. Jim has become a father a few more times over. He is a calmer person. Chilled. You can just feel him enjoying it more this time.”

Production for the sequel was postponed in March due to the pandemic lockdown. But the team has returned back in June to continue the filming in New Zealand for the movie that was initially slated for the year 2022. The current release date for the 2009 movie’s sequel is December 2022. The third sequel is slated for December 2024.

Sharing about the production’s cost, Jon told 1News, “This one production alone is going to hire 400 New Zealanders to work on it. We’re going to spend, in the next five months alone, over $70 million here.”

Stone Street Studios which was known for their work with the Lord Of The Rings trilogy, The Hobbit trilogy, King Kong, and the original Avatar has been hired to work on ‘Avatar 2.’ The first movie became the highest-grossing movie ever at $2.79 billion worldwide before it was barely beaten by ‘Avengers: Endgame’ at $2.797 billion.

Cameron also talked about two more possible sequels, but they will depend on whether these two movies will be successful or not.