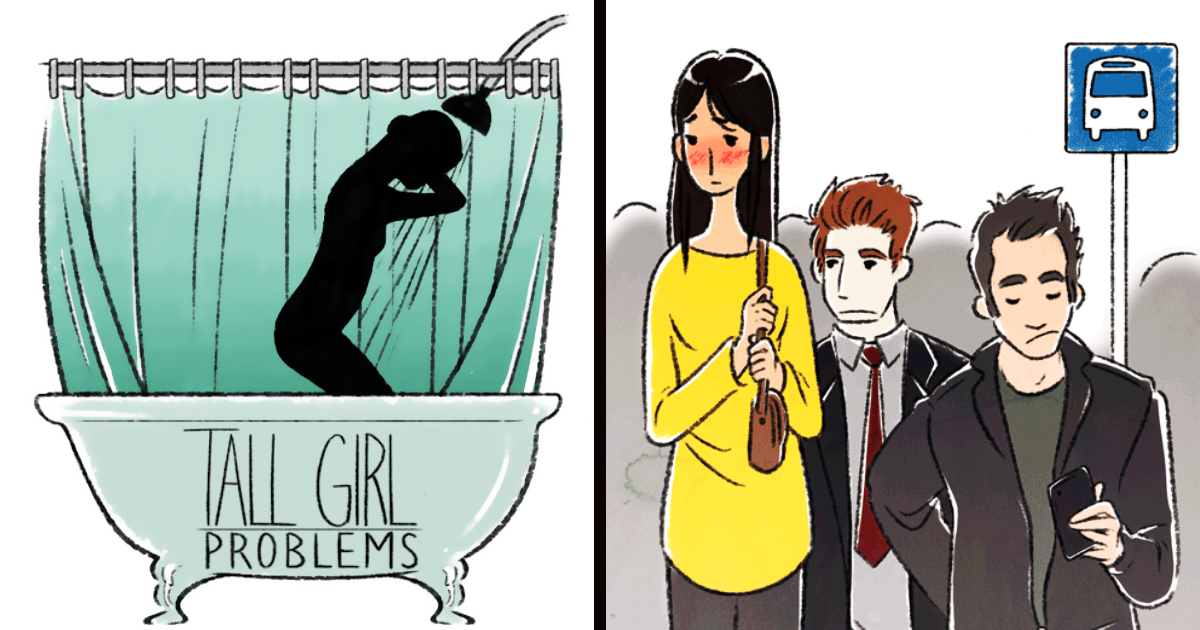 Where do you fall in the height spectrum? Many women struggle with being shorter than the average. But that doesn’t mean that you only get all the perks when you’re tall. Of course, there’s the nice prospect of becoming a model, but life, in general, has you stand out from the others quite literally everywhere.

Sara Pocock decided to start a series of short animations and cute illustrations on ‘Tall Girl Problems’ and ‘Short Girl Problems.’ The animator shows just how a lot of things are not designed for the comfort of many. The average height does not represent the height of women who have their feet hanging when sitting on the chair or have to bend in front of the showerhead.

You really don’t mean to look down on people nor do you like feeling awkward about your height!

Really hate bumping on the table all the time.

The bed and blanket are just too short for you.

And you can’t help but having to bend over when you shower.

The fight for the tallest woman ever is pretty intense. Currently, it’s being held by a Chinese named Zeng Jinglian. She earned the record with her staggering height at 246.3 centimeters (8 ft 1 in) tall. The woman from Yujiang village in the Bright Moon Commune, Hunan Province, passed away in 1982.

Nothing like staring at your chest while you brush your teeth.

It fits, but always too short.

You also don’t want to stand out more than you already are.

Sarah Pocock is an animator and illustrator who works for BuzzFeed, CN, FOX, and many other media. She moved to Minneapolis to chase after her dream and got a BFA in animation at the Minneapolis College of Art and Design in 2006.

Then, some women are just too short to see things.

The seatbelt hates you.

World’s shortest woman is Jyoti Kisange Amge, an Indian actress. She held the Guinness World Records and she stands only 62.8 centimetres tall. She is now 27 years old and she earned the title ever since she turned 18. She’s also cast in an episode of American Horror Story: Freak Show as Ma Petite.

Too cute not to be hugged.

Can never look at the mirror at eye-level.

The perfect armrest… not!

The chair is always too high.

Why do people make these tall shelves?!