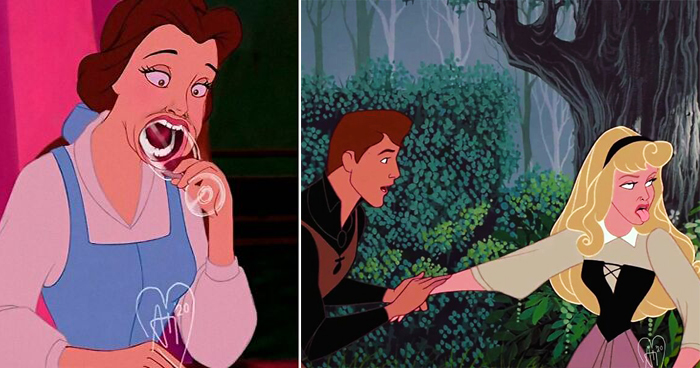 Disney devotees! It’s time again to gather and prepare to behold. The Indonesian Artist – Andhika Muskin has worked his magic, bringing life into our favorite Disney characters. Now, they appear fashionable and fresh in this new world, and it’s can be so mesmerizing to have characters from our childhood appear so grown up and relatable. Illustrator Muskin has created a Realistic Disney Series in which he illustrated what your favorite Disney characters would look like if they are living in 2020.

The magnificent artwork draws inspiration from contemporary trends, and it’s indeed remarkable to have these characters feel like people that can be seen on the streets. Besides, if there’s anything we can all agree with, 2020 has been a roller coaster and which is why Artist Muskin has been providing some moments of humor via his pages to help lighten up the mood. A lot of people have proven they can’t get enough of Muskin, and hinged on these positive reactions, we’ve keyed into Muskin’s universe, collating 20 of his best ones for your perusal. Enjoy it!

Cat Being A Complete Jerk To Owner

Meghan Should Have Done This Before Now

Artist Muskin had always wanted to be an artist and not specifically a digital artist. Having ventured into the use of acrylic painting style, Muskin now uses Photoshop for his art creations. According to the artist, each of the photos takes quite an amount of time, which is mostly dependent on a lot of factors. Muskin has spent roughly 15years being an artist, and he has truly learned that the journey of finding one’s art style is essential as letting it go for the sake of investigation.

The Annoying Guy From The Land Is Back Again

Here’s A Good Friday For The Girls

Snow White Has Had Enough. Not Today, Satan!

Some of his photos take up to three to four days, while a few takes just an hour. Being a true devotee of Disney movies, Muskin reimages characters, including Ariel, Pocahontas into realistic yet relatable situations. The artist adores Disney, and his love for the characters started in early childhood, specifically when he was given a VHS tape of Alice in Wonderland at age 5.

Social Distancing Isn’t A Hinder To Curse A Newborn

This Is Relatable! We All Have That One Friend….

The Switch Challenge: Boyfriend Makeup Is Better Than Yours

2020: The Year Of The Multitasking Game

Adding a twist to these characters, Muskin gets his ideas randomly and believes we can all relate to Disney, having grown up with its characters on the screen. Muskin has, however, showcased that Disney characters rule everything, and now they are ruling the modern world too.

The First Few Minutes Of Having A Cold Shower

The Profession Of Love Moment

The 2020 Alice In Wonderland

You Can’t Tell Of What Transpired In A Zoom Meeting

Over time, Muskin has been sharing Disney characters on his social media pages. When he noticed that more people re-shared them, he started bringing the characters into iconic status. They presently blend in with our daily life, and indeed Muskin deserves applause for his creativity.