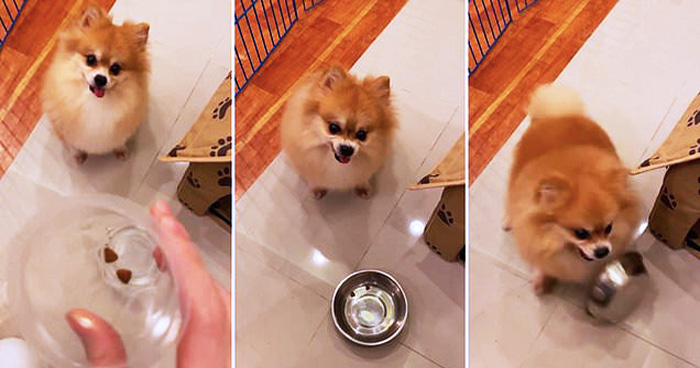 Our pets are the master of the house, we all know that. People like to say we own dogs or cats, but the truth is actually the opposite. We feed them, we clean up after them, we take them for walks, we spend hundreds of dollars for cute new shirts and sweaters for them. Especially dogs.

So, when Pao, a cute Pomeranian from Thailand, was told he’s getting a new diet, he wasn’t about to go down without a fight.

Pao went viral: he sent his food flying after seeing what his new diet is like.

Honestly, anyone can relate to this rage – you can prank me, joke with me, carry me around, but never touch my food. Ever. Don’t event think about it. Pao sent his bowl flying in a rage after he sees only two pieces of dog food inside his bowl.

The most hilarious part was probably how the dog just slowly looked up at her owner. As if briefly asking, “Really? You’re going to do this now, woman?”

Captioning it, the owner wrote, “I think you need to diet.”

Pretty clear that he disagreed.

People really love this dog’s attitude and they way it just slowly look up as anger was visible in its eyes.

Pao’s mom did not give up. She shared a second video of ‘Angry Pao’ and carefully hid the plastic cup she used to scoop up the food.

It’s really hilarious to see how dogs react when they see us behaving in a way that is different from before. This time, Pao doesn’t fly into a rage, but decided to flash her scary sharp canines to mom. As if she’s threatening she’ll become a demon if the bowl isn’t full.

She readies her teeth…

…and goes on to eat anyway.