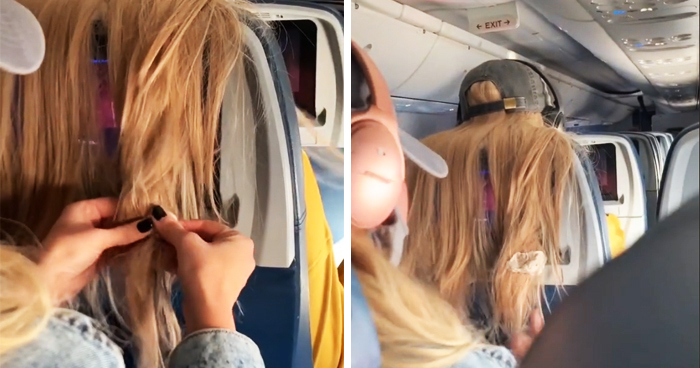 Some of us are lucky enough to have never been seated with annoying people before. Those who have can attest just how annoying it is getting stuck hours next to that one self-centered, disgusting, egoist passenger. Especially a woman with long hair who keeps flipping her hair back and block your only entertainment on board.

Oh, she was so into making this ‘entertaining’ for her since she can’t use her TV.

TikTok user Janelle Elise Flom shares a clip of when she got super annoyed at a long-haired blonde in front of her. Her latest TikTok on janelleelise has been played 98.6m, almost 100m times with 155k comments.

She gave her all kinds of sweets: gum, lollipop, and even coffee!

She was definitely getting a lot of treats, just not in the way she was expecting it. The annoyed passenger made sure she spread the gum on her blonde hair, then proceed to take out the lollipop she was sucking on to put on her hair too. After that, she dunks the end of her hair into her coffee.

She repeatedly flipped the hair back to her, but the annoying woman did not care and flipped her hair back. They went back and forth for a bit before she realized that her hair is full of sweets and smells like coffee.

A flight attendant in black passed by and probably noticed what was going on, but she didn’t react.

Some people think that this was staged with one writing, “That HAS to be a wig.”

Another commented, “No way she doesn’t feel that but I support you, sis.”

But even if it’s not staged, a lot of people agreed to her actions. One wrote, “Ok, I legit at first thought that was awful until she showed her putting the girl’s hair away from her and the girl kept putting it back. So, it changes.”

Another wrote, “At first, I didn’t agree but then she kept flipping it back and ugh.”

Several others made jokes about how the flight attendant just walked by and pretended nothing happened. One note that she was ‘smart to mind their own business.’