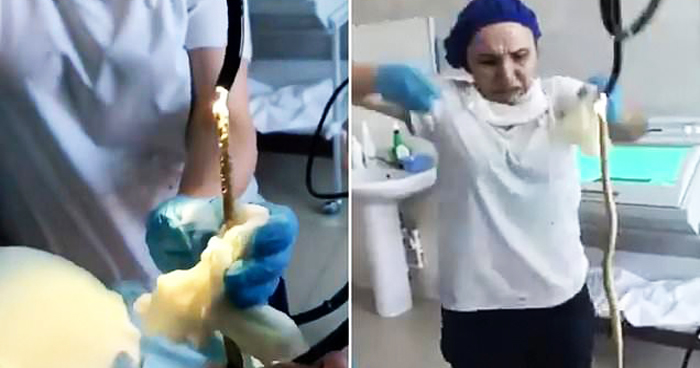 A terrifying clip has gone viral on the internet showing the moment a 4ft snake was pulled out from a lady’s throat. An unidentified woman, a Russia-based had to undergo surgery to have the serpent removed after it reportedly crawled into her mouth as she slept in her home in Dagestan. As she gradually felt unwell, the woman was taken to the hospital where medics placed her under a general anesthetic before getting to work.

A terrifying clip went viral, showing the moment a 4ft long snake was removed from a woman’s throat

In the viral clip, the woman was spotted lying on a table while doctors attending to her inserted a long tube into her mouth. Shortly after, the reptile was pulled out, resulting in an audible gasp from doctors and nurses in the room. As the weird operation was performed, one of the doctors on camera said: ‘Let’s take a look at what this is.’ A female medic then grabbed the serpent with a terrified expression on her face, jumped back stunned before dropping it into a bucket in the room.

It’s unclear if the reptile is alive and the doctors, on the other hand, couldn’t also tell how long the reptile had stayed inside the woman. Nevertheless, the Ministry of Health situated in Dagestan hasn’t made a comment on the strange case. Accordingly, locals revealed that such incidents occur infrequently and warned of the dangers of sleeping outside of homes. Commenting, internet users claimed the reptile could be a giant worm or a parasite but it evidently appears too big than the suggestions.