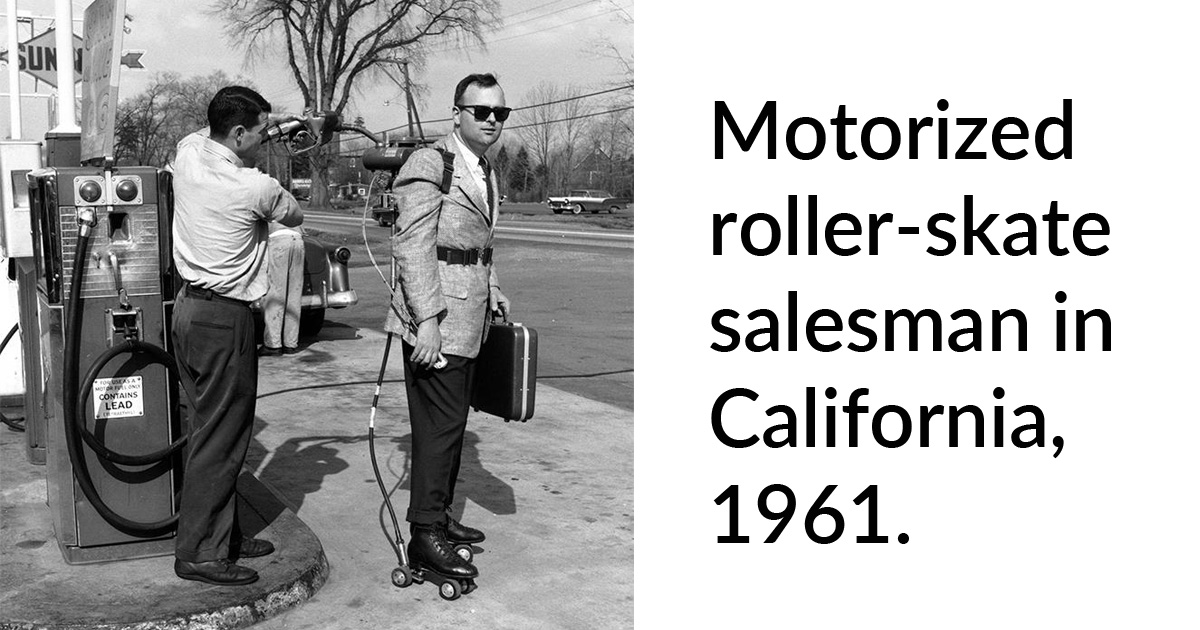 There was a time when carrying a huge block of brick called a ‘cellphone’ would be considered awesome. Briefly after that, people aimed for smaller GSM phones with these cool minigames that we spent countless hours on. Yes, ‘Snake’ was possibly the world’s best game ever invented. They can’t compare to our ultra-fast Galaxy Fold or iPhones, but the memories and history are valuable.

The same can be said for these machines and equipment. But back in the days, things were made considerably huge and seemed very alien to us all. There will be some that come across as really weird and nonsensical, but don’t forget – we’ve gone back to using 6″ phones after designers painstakingly worked hard to make mobile phones as small as possible!

These are shared on Reddit by people who learned interesting historical facts or came across a mechanism they’ve never seen. Scroll on and see if you’ve seen any of them!

Pedal skates made and patented by Charles E. Nordling. This is Charles himself c. 1910.

“This British couple is sleeping inside a ‘Morrison shelter’ as protection from collapsing homes during the WWII ‘Blitz’ bombing raids. (March, 1941)”

“This car is a French ‘Delahaye 175S Roadster’, introduced at the Paris Motor Show in 1949. Only one was ever made. It was recently sold at auction for around five million dollars.”

“Kodak K-24 camera, used for aerial photography during WW2 by the Americans.”

“A rail zeppelin and a steam train near the railway platform. Berlin, Germany, 1931.”

“A Native American telephone and switchboard operator in Montana, 1925.”

“Soviet peasants listen to the radio for the first time, 1928.”

“A thin TV screen (only 4 inches thick) with an automatic timing device to record TV programs for later viewing is the wave of the future as shown at the Home Furnishings Market in Chicago, Illinois, on June 21, 1961.”

“The open side view of an old calculator.”

“The world’s oldest surviving diving suit: The Old Gentleman, from 1860.”

“Robo-Vac, a self-propelled vacuum cleaner part of Whirlpool’s Miracle Kitchen of the Future, a display at the 1959 American National Exhibition in Moscow, 1959.”

“A 300-year-old library tool that allowed researchers to open seven books at once in Palafoxiana Library, Puebla.”

“A 350-year-old pocket watch carved from a single Colombian emerald.”

“The ‘Isolator’, by Hugo Gernsback: a helmet for insulating the senses against distraction, July 1925.”

“A man with a Punt Gun, a type of large shotgun used for duck hunting. It could kill over 50 birds at once and was banned in the late 1860s.”

“Using a two-horn listening device at Bolling Field in Washington, D.C., in 1921 before the invention of radar, to listen for distant aircraft.”

“Hugo Gernsback and his television goggles, invented in 1963.”

“Orgone Accumulator, a device sold in the 1950s to allow a person sitting inside to attract orgone, a massless ‘healing energy’. The FDA noted that one purchaser, a college professor, knew it was “phony” but found it ‘helpful because his wife sat quietly in it for four hours every day.'”