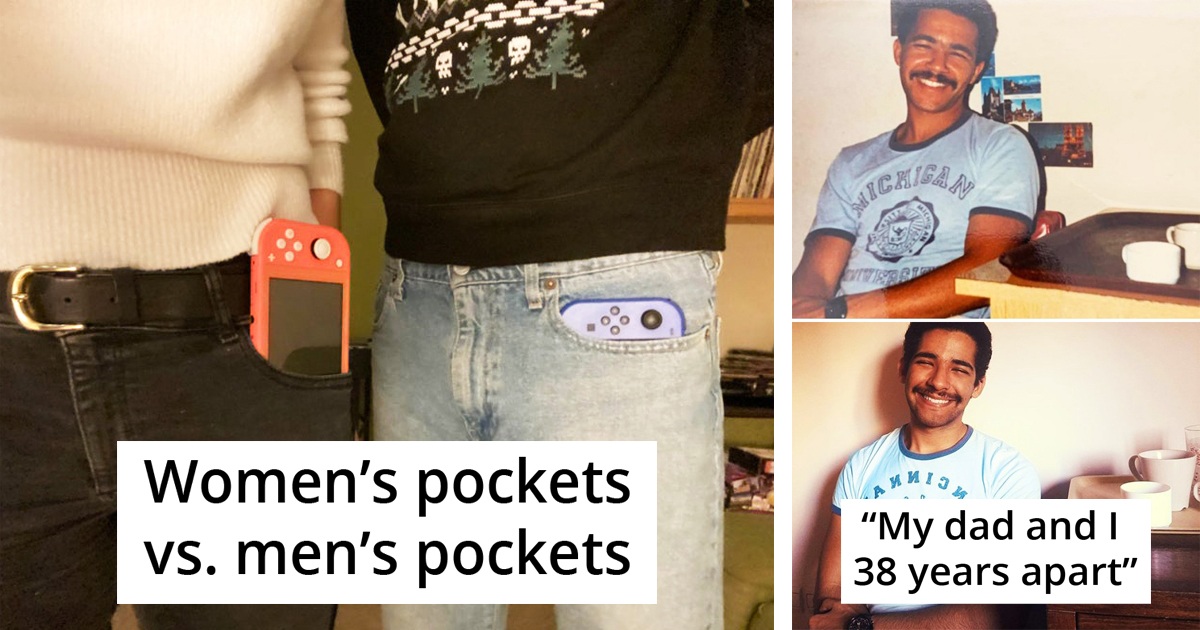 30 Wondrous Pics Of Comparison That Show The Significance Of Things

Some people work better with visuals when they get a clear image of what they are looking with. These images will definitely leave a deep impression on you, thanks to how clear they show the comparison. Several of them had humans as a nice comparison. Some are pictures that managed to survive through time.

Keep scrolling for bonus information on some of the pictures. What are these extinct creatures, and why is that flag so huge?! If these are interesting, head over to our other comparison articles for more!

This couple found their picture of their first meeting on a video 50 years later.

“The progression of Alzheimer’s through my mom’s crocheting.”

“I found a very small frog.”

“Fossils found of car-sized turtles that once roamed South America.”

The fossils of this giant turtle species have been found in Colombia’s Tatacoa Desert and Venezuela’s Urumaco region, according to BBC. It was presumed to have lived about 7 to 13 million years ago and is called ‘Stupendemys geographicus.’ These turtles also seem to have horns on both sides of the shell for fighting. They also live in the bottom of lakes with crocodiles.

“Shirts made from plastic bottles.”

“My cat Domino has Heterochromia which has the side-effect that light reflects differently causing him to look like the Terminator!”

“What does a mask do? Blocks respiratory droplets coming from your mouth and throat.”

A comparison of a Spanish ship flag that was hung during the the Battle of Trafalgar in 1805.

“Bamboo that grew up during the pandemic without the effect of tourists’ touch.”

The same humpback whale that was first seen in 1985 around the West Coast of Mexico.

The historical creature humpback whale can grow up to 16m long and 33 tons big. Humpback whales are popular because they enjoy surfacing a lot and popular with whale watchers. It is also believed that they can live up to 100 years. This particular whale sighted in 2020 since 1985 has been seen 17 times before.

This area was replanted by a couple who filled it with more than 2 million tree saplings 18 years ago. Now it’s the home of 33 animal species, some which almost went extinct.

“Five generations. My daughter was born the same year my Great Grandma turned 100.”

“My daughter and my kitten lost their baby tooth in the same day.”

“Pretty sure no one switched my baby at birth. Progress from 3 weeks left inside to 3 weeks on the outside.”

“My dad and I 38 years apart, thought i should post it here.”

“My grandpa and his friend who was born across the street from him 2 hours after him. Navy picture around 1942/43 and when they turned 93 a couple of years ago. They swapped places in the second one.”

“After 9 years of work, I finally got my braces off! I couldn’t stop smiling.”

Have you ever thought why plastic combustion is not used to combat plastic pollution? This is because burning plastic releases very toxic dioxins that contribute to greenhouse emissions. You need a very effective and efficient incinerator. But even then, it is no very effective compared to recycling or burying them.

“The color change between my horse’s summer and winter coat is neat.”

“The oldest door still in use in Rome. Cast in bronze for emperor Hadrian’ rebuilding, they date from about 115 AD.”

Let’s show our environment some love if we don’t want to reap the horrible results in the future. Animal extinctions, toxic pollution, plastic waste – these are things that we can very well prevent.