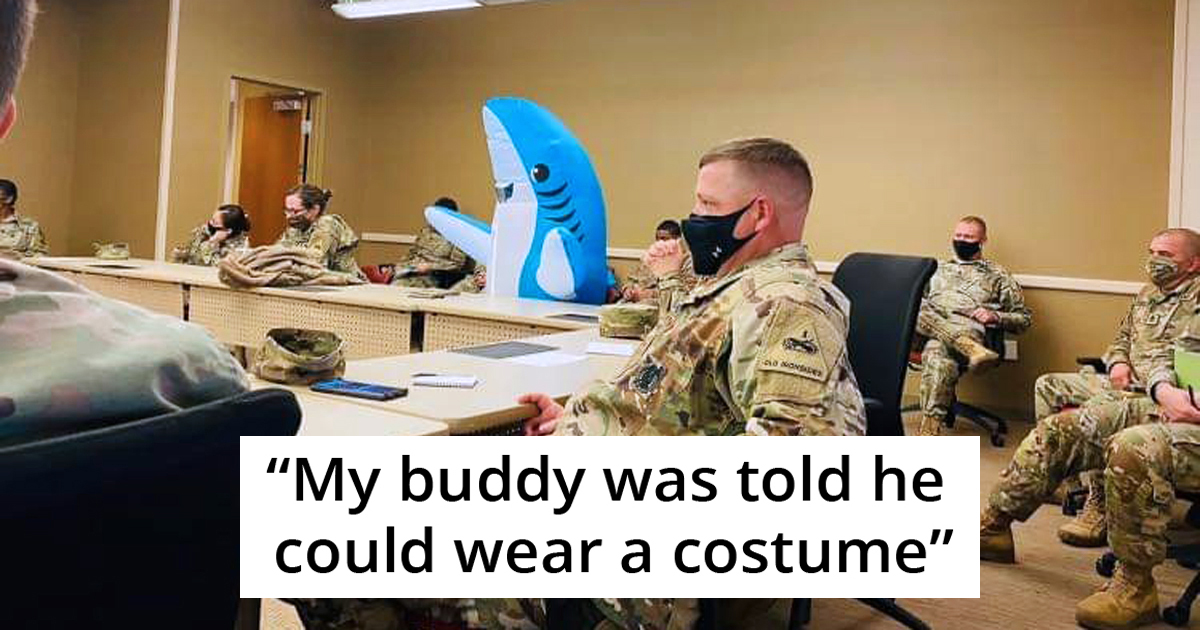 Halloween is a fun day where you get to dress up and goof around with friends. But with the pandemic going on right now, the somber mood, as well as strict safety guidelines, prevented some from wearing their costumes. Some really hate the attention of dressing up. But not these people who have been looking forward to Halloween. Not these people.

The year 2020 has been crappy, but for these people, we don’t think they can be represented any better than these sad and funny pictures of the only one dressed up for the occasion. But hey, it’s harmless fun, at least now we know they are fun at parties!

“Being the only one in Congress to wear a costume for Halloween.”

“No one else dressed up for Halloween.”

“I was the only person I saw dressed up today, but I think I looked McFly as hell.”

“All of my coworkers agreed to dress up as smurfs for Halloween. I’m the only one to go through with it.”

So, what’s with pumpkins carved as jack-o’-lanterns have to do with Halloween? It appears that this tradition comes from a legend of a man named Jack who tricked the Devil himself for his own gains. But when he dies, he was not allowed the heaven nor hell, forcing his soul to wander the earth for eternity.

“Only one who dressed up at work today. I’m a Star-Buck!”

“This is Joel – the only person at work who dressed up for Halloween. He doesn’t care that no one else dressed up, he’s been working all day like this!”

“My kid was that “only one in costume” kid yesterday in class. She didn’t care.”

“When you are the only one to take Halloween seriously.” Picasso – Woman With A Hat, 1962.

“When you’re the only one in a company of 1200 people that dresses up on the 31st… ‘These deals getting worse all the time!'”

“Teacher’s the only one who showed up in costume.”

“I was the only one to dress up at my job for Halloween. Compounded with the fact that our store closes for good today, it’s been a day.”

“I was the only one who dressed up at work. I regret nothing.”

“I was the only one who dressed up for our weekly staff zoom call.”

“Only one at work dressed up. It is by caffeine alone I set my mind in motion… Happy Halloween.”

The Irish began carving scary faces on on turnips back then to scare Stingy Jack’s soul away on Halloween, the day where dead souls roam the earth. But as some Irish immigrated to the US and brings their Halloween culture there, they used pumpkins instead of turnips as those were more common and native to the region.

“I work in an office and they told people to dress up. I’m the only one dressed up…”

“I’m the only person in my entire office of 30 people who dressed up today and I’m in a full body banana suit.”

“My VP of Purchasing sitting in a meeting right now listening intently to our president. He’s the only person in costume.”

“Today was a costume party at my dog’s daycare but he was the only one dressed up. He’s traumatized.”

“My buddy was told he could wear a costume…”

“I too am the only one at work who dressed up for Halloween… and I’m their boss! Safety first, kids!”

“I won my office costume party. I was the only participant and the judge, but I’m still proud.”

Does will-o’-the-wisp has anything to do with Jack-o’-lantern? Another name for the phenomenon is called ‘ignis fatuus,’ a Latin for ‘giddy flame.’ The term is sometimes used interchangeably with the lantern, but Jack-o’-lantern is just one among many urban legends that touch on will-o’-the-wisp. In Japan, they are called ‘hitodama’ and ‘onibi.’ Scientists try to explain them as the decaying process of organic materials that produce lights, often observed around the marsh.

“When you’re the only one who dressed up…”

“I too was the only one dressed up at my office today. Shaved my head for it and everything.”

“Dressed up for work. Turned out I was the only one…”

The coolest in that party.

“I’m the only one that dressed up at my office and I’m in a pickle suit. Guess you could say we’re in the same boat.”

Don’t let anything dampen your spirits to have fun, guys. Dress up and exert dominance over them all!