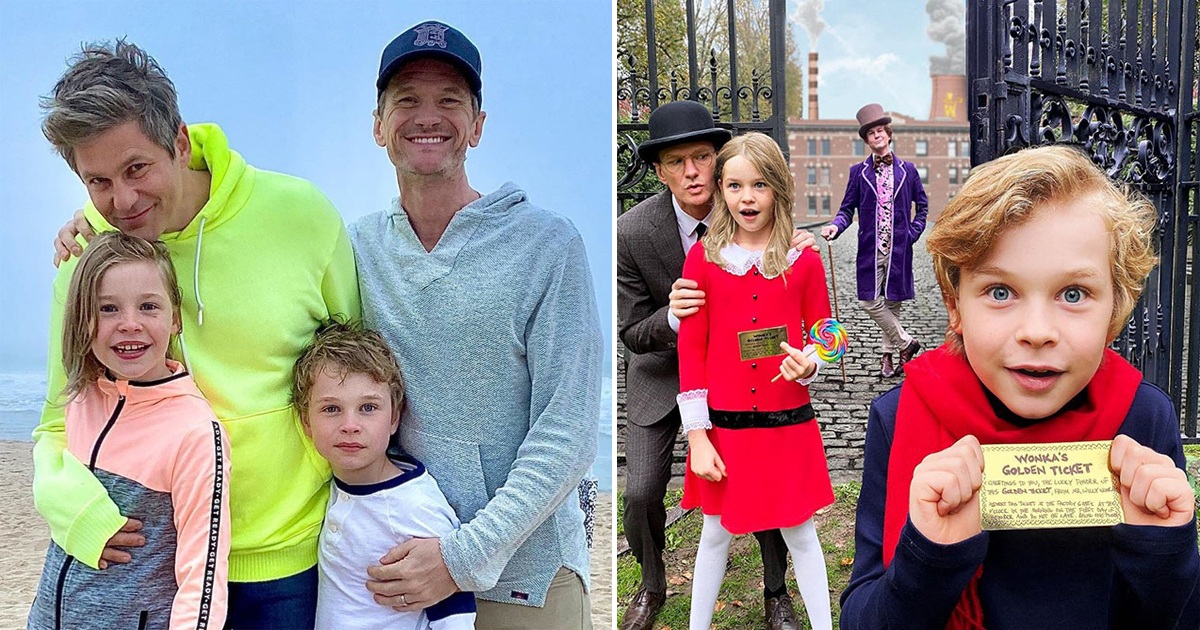 People think Neil Patrick Harris and husband David Burtka absolutely won the internet on their first Halloween pictures together ever with their twin children. They really can’t top that 2011 adorable family picture when the Peter Pan theme when the dads played Peter Pan and Captain Hook while daughter Harper played Tinker Bell and Gideon, one of the little brothers.

This year, we are blessed again with yet another Halloween family picture from NPH’s family. The year 2020 sucked, but they made it less, so they keep the Halloween spirit on with their goofy pictures!

So, for some of you who are probably new to the family, the 47-year-old American actor was married to David Burtka in 2014, but the romance had begun much longer before that. They first met in 2004, and both proposed to each other in 2007 and 2008.

Harper and Gideon are fraternal twins and biological children of the pair through a surrogate mother. Each egg was fertilized with each man’s sperm, and hence, one adorable family we can’t stop going ‘aww’ at!

This the family in 2011 when the twins had just turned 1. Peter Pan theme is way too adorable.

In 2012, the family used Wizard of Oz theme. They really went all out!

Then in 2013, the family just can’t get enough with dressing up cute for Halloween, so they did two. This is Alice in Wonderland.

The other was a mix of Halloween classics: Frankenstein’s monster and his bride, the Dracula, and a werewolf.

The sudden change in what used to be a ‘normal’ life for many of us has become detrimental for many, especially businessmen. But on the other hand, families are benefiting from spending more time with their loved ones.

Quality time while having meals together, spending particularly more time to dress up for Halloween like NPH’s family does, has proven to strengthen familial bonds according to a survey by National Pork Board.

In 2014, Batman-theme was the chosen theme of the family. Dads were villains while kids were superheroes!

We all know how they ended up like this. “Star Wars: The Force Awakens” in 2015 was the trend.

Not to mention the kids are getting more and more into roles. Just look at their expressions, they look like brave warriors ready to fight!

Parenting during the pandemic when going out becomes very restricted, American Academy of Pediatrics suggests that parents remain honest about the situation. Exercising safety precautions is important, but getting the children to understand how this can protect them and those they love is just as important. Recognize their reasons for getting upset and use questions to redirect their attention or to find an alternative solution.

But most importantly, take care of your mental health when you feel overwhelmed.

The family went a little original in 2017 and called this ‘The Burtka-Harris Halloween Carnival of Curiosities.’

NPH went on to warn fans of Hitchhiking Ghosts in 2018, seemingly a reference to Disneyland’s Haunted Mansion.

Their 2019 Halloween costumes were hailed as possibly their most creative ones ever. All the costumes were based on historical figures in the field of art: Harris was Vincent Van Gogh, Burtka was really vibing Salvador Dali. The twins were also completely in character. Harper was dressed as Frida Kahlo while Gideon was Andy Warhol.

This year, the family paid homage to one of the best musical movie of all time, “Willy Wonka & the Chocolate Factory.”

Neil captioned his post, “Oompa, loompa, doompety doo! We’ve got a family photo for you!”

“This year, may you invent an October 31st that is spirited, safe, and scrumptious,” he didn’t forget to include a creative, stay-safe message to his fans. “Happy Halloween from the Burtka-Harris Crew!”

They are such a beautiful and cute family. We can’t wait to see their next Halloween ideas already!