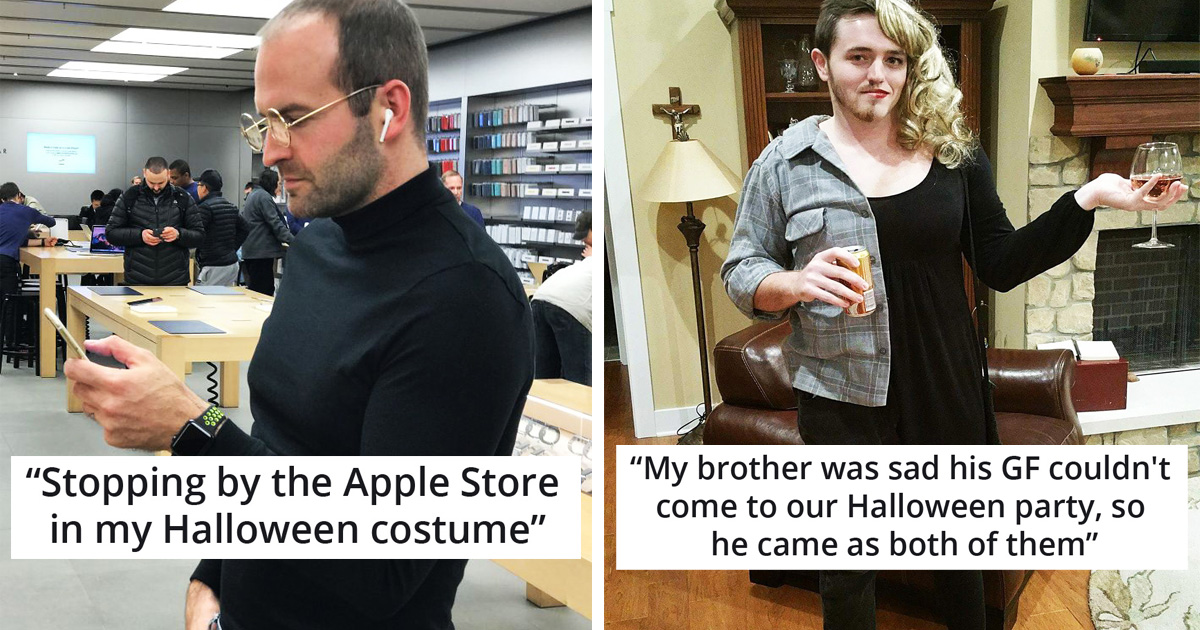 On the day of death, it was said that wearing as scary as you can deter evil spirits. But how do you convince them that you are indeed not a human being to be messed with? Halloween has become more of a fun time in modern civilization to wear costumes and go around for trick-or-treating.

It is pretty unfortunate that this year, we won’t be people in creative, handmade costumes as they go around impressing people. Halloween party is also a big no-no… but at least there’s still the social media where everyone can wear and share their Halloween look! These DIYs are just so impressive, we’ve got to share them with you!

My friend is getting chemotherapy. But Halloween is also a priority.

This mama with her dragons. Dracarys?

I was in my Halloween costume and dropped by the local Apple store.

This is my brother. That’s not his alter ego, but his girlfriend because he was sad she can’t come for the party.

No Face costume looked really good it made a girl cry.

So, what’s the deal with dressing up in scary costumes for Halloween? While most people are now using this as an excuse to dress up as anything, it was part of a ritual to cast off evil spirits, even if it’s not scary. Halloween, or All Hallow’s Eve, could be traced back to the early years of Christianization.

Grandpa was Princess Leia with R2D2.

This one friend of mine 3D-printed his own face and nailed Halloween.

A friend decided to dress like his black cat for Halloween. Cat was absolutely terrified.

My brother-in-law won the office costume contest with his friends.

In Ireland, this day was referred to as Samhain, the day when fairies and dead souls find it easier to return to the land of the living. But the tradition to knock one door after another asking for treats by saying the phrase ‘trick or treat’ did not begin until more than a thousand years later in the 16th century.

We are a family of Incredibles.

I did some makeup with a friend and we became anglerfish for Halloween.

Sister-in-law with her sisters on Halloween as Hocus Pocus.

We have a cute Harry Potter gang here.

So, Pokemon Go was trending, and Halloween came.

In one region, a man would dress up as ‘Láir Bhán’ or a white mare, leading a group of children for trick-or-treating. Instead of candies, they ask for food in general from families, and those who donate believe that good fortune will come to them and bad luck if they don’t.

He got himself a Ratatouille for Halloween!

Our weatherman could finally wear his costume on air.

This practice has its history very well rooted in the UK but only began to be adopted in America in 1911. While it was considered a rather religious day that both kids and adults take part in, people like to think only kids celebrate them in America.

I am 7 foot tall and decided to be a normal guy for Halloween. On stilts.

I was that stock photo guy for Halloween.

We decided to go for a couple-theme.

Getting deported was my Halloween costume. Scary.

My girlfriend and I tried our couple’s costume this Halloween, and we looked great.

For the party, this guy decided to become the fire.

In Mexico and Spain, people celebrate a similar day called ‘Día de Muertos’ or the Day of the Dead. It was previously celebrated in early summer but later was adjusted to have a similar day with Halloween from Christians. While Halloween has its origin in Ireland, the Mexicans can be traced back to their predecessors, the Mayans and Aztecs.

He’s slaying in those stilettoes.

Daft Punk costumes for the wife and me this Halloween.

Son was Pikachu in a pokeball for Halloween. Disguised his wheelchair perfectly!