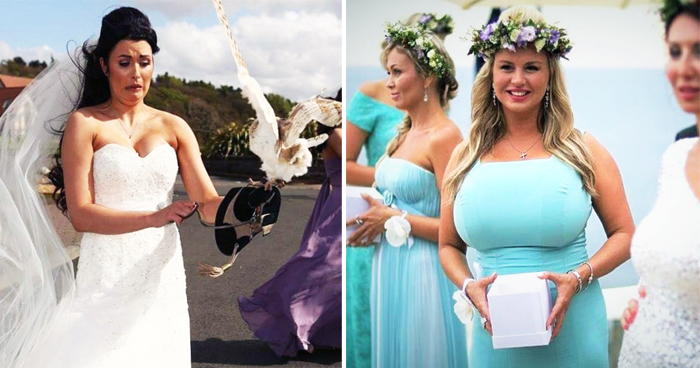 Wedding photos are considered a treasured memento for forever memories. In all cases, couples tend to have a clear plan of what they want, including flattering poses (who and not to snap a photo with) and even beautifully designed gardens/halls. But sometimes, the wedding photos, in particular, doesn’t seem to go quite as planned.

Weddings are fun but can sometimes be messy and chaotic. Having a wedding, in reality, means you can end up with some pretty hilarious wedding photos.

However, a typical wedding that involves severe weeks of preparation and even minor irritation can be better with a slice of humor and perhaps a little craziness, just like the fellows compiled in this article.

These hilariously Strange photos prove that weddings are never perfect and that even if they’re a complete disaster, there’s an iota of fun for everyone involved. From a nocturnal bird crashing a bride’s pose to getting married on Halloween, never expect your special day to go as expected.

Pet Disagrees To Be Left Out In Wedding Photos

Here’s A One In A Million Wedding Photo. Can You Spot The Lightning?

The Photo Looks Ok, Except That The Groom Is Wearing Only One Shoe

When A Bridesmaid Is Hotter Than The Bride

You Don’t Need A Wedding Cake When There’s Shawarma

‘My Husband & I Were Going To The Wedding Reception. The Road Had Many Turns, And The Driver Was Going So Fast That Both Of Us Felt Sick’

Expect Creepy Things When You Get Married On Halloween

The Little Girl Is In Either Doubt Or Shock

The Bride Shouldn’t Have Jump In Such A Dress. Ever

Wife Hilariously Slept off In An Hotel Hallway After Wedding

The Best Description Of Worst Wedding Guest Ever

Nocturnal Bird In A Tussle With Bride

Be Careful As You Can Lose Your Eye To Confetti

Now, The Couple Is Tall Enough For Their Wedding Photo

Groom Sister Passed Out When The Judge Said: ‘You May The Kiss The Bride’

‘My Brother Got Married In January. My Parents Loved This Photo. So Do I But For Different Reason’

Flower Girl Is Exhausted Of All The Wedding Stuff

Kourtney Kardashian Responds To Travis Barker’s Ex-Wife After She Called Her A ‘Downgrade’ February 26, 2021

30 Heartwarming Comics About A Dad Teaching His Son Honesty And Kindness February 26, 2021