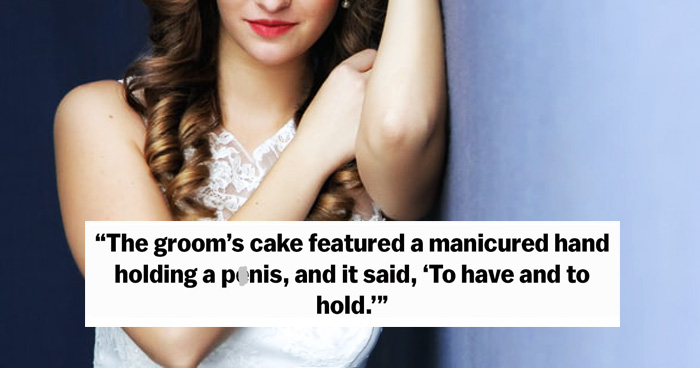 20 Most Awful Weddings These Unfortunate Guests Have Ever Attended

Subjecting your guests to awkward wedding parties should be illegal. These guests are sharing to Reddit the worst weddings they ever had to attend and they are really giving us that secondhand embarrassment. Some of these are so wild, you’d wonder how could people even live through those moments.

“A wedding in Las Vegas in a cramped meeting room. The bride and groom dressed in Renaissance Fair costumes. The reception was held in their hotel room. They were in their late 30s.” – LadyLovesRoses

“Shotgun, redneck wedding in rural Georgia. The bride: a 6 months’ pregnant 19-year-old. The groom: a 27-year-old with a speech impediment. The scene: outdoors at a rundown Victorian farmhouse in rural Georgia in the blazing heat of late July. Ceremony held near sunset.

Highlights of the ceremony: The bride was walked down the aisle by the groom’s 55+ Father-by-3rd-marriage who was suspected to have slept with the bride. Dirt parking lot. Everyone literally melted in the 90+ degree heat. A monster truck drove by near the end of the ceremony, revved its’ engines, and shouted ‘GET ‘ER DONE!'” – EsseLeo

“The minister told the bride that she would have to love her husband even if he “spits in her face with anger.” Seemed like a weird thing to mention during a wedding ceremony. There were about 150 people there, and they served wood-fired pizzas for the reception meal. It sounded and smelled delicious until everyone realized that the oven could only produce two 12” pizzas at a time, with about 15 minutes in between each batch. Most people spent the reception waiting in an endless line for a sad slice and a room-temperature salad. Their donut cake also didn’t have enough donuts for everyone. The wedding coordinator described it as ‘Pinterest dreams gone wrong.’” – Mission-Interview-88

“My cousin had a “destination wedding” probably a three-hour drive for all the guests. Close enough to drive but far enough to not be able to run back home. Wedding was at like noon, the reception wasn’t until almost 6 pm. She wanted to go on a drinking bus tour of the city with the wedding party and take her wedding photos before the reception. The entire slew of guests all hung out in the hotel lobby for 5 hours, and there was no food. Eventually, we had some people run and get a bunch of taco bell just to tide us over.” – sasspancakes

“It was the wedding of my friend’s mum (I was there as my friend’s friend). During the speeches, the bride’s dad had a stroke. An ambulance came and he was rushed off to the hospital. The wedding came to a very abrupt stop and the family was devastated.” – libanator4

“My uncle’s fifth or sixth wedding (I honestly don’t remember which because he’s been married and divorced so many times. He’s even about to remarry a past wife for the second time soon) and he fully expected wedding gifts of cash only. During the reception, he gathered all the envelopes and set himself up at a middle table with a notebook and calculator, and counted all the money he got. Instead of enjoying his reception, he was a greedy fecker seeing how much money people gave him. I was barely 20 and I had scrounged up twenty bucks to give him. But when I saw him counting everything up with his damn reading glasses and calculator, I just kept it.” – Anne_of_Avonlea-

“The day has been hotter than hell with beautiful blue skies… No water. The venue absolutely does not have cups, or carafes, or even an orange gatorade jug on standby. Wine glasses and rieslings sure, but water? They’re inexplicably stymied by the demands of the guests for simple hydration.” – CeeSea2525

“Bride and her mom got into a fistfight in the church parking lot. The priest tried to break them up and the mom punched him. The reception was in the basement of the church (no food other than the cake, no music, or anything) and the bride & groom never showed up. People sat there awkwardly for several hours waiting for them to show before they went home.” – Sonyabean23

“Bride did not know how spell grooms last name (her new name) to sign marriage license- they had been living together for a year at this point.” – Dalyro

“When my uncle got married the best man dropped the ring. In the dead silence of the church, you could hear it ‘ting ting ting’ as it bounced along the floor, followed by one of the groomsmen stage whispering “Jesus Christ” loud enough for everyone to hear. The pastor didn’t even bat an eye, just said, “The ring has already been blessed, thank you.”, and carried on.” – ink_monkey96

“I attended a wedding where they had an Elvis impersonator officiating. He’d. never done a wedding before, and it showed. They didn’t even do a rehearsal walkthrough. The timing was so awkward. And the groom stood staring at Elvis the whole ceremony instead of the bride.” – SomethingFit4aQueen

“My cousin’s wedding, where the officiant announced during the vows that the bride (who I was meeting for the first time that day) had kept herself “pure” for her husband. I asked my cousin during the reception if he had also kept himself pure, hahaha. They were both in their 30s. There was also a LOT of language in the ceremony about how marriage is only true marriage when between a man and woman.

Reader, this was in 2018. I had also assumed this was going to be a large wedding, as I hadn’t spoken to this cousin or their parents or siblings in several years, but it was quite small. Don’t know why I was invited. Very awkward. Regret not saying “gross” and walking out.” – PDXWanderlust

“The ceremony was scheduled to start at sundown, but the bride was late getting ready and taking photos, and it started when it was already dark. It was the middle of winter, on a grassy open space, and it had rained the whole week before. Everybody was freezing and muddy, the women wearing heels were holding onto men to be able to walk, and the bride’s something blue was her poor bridesmaids. The whole ceremony was a big ball of cringe, with loads of sexist remarks and the groom implying in his vows that he had taken the bride’s virginity.

Then they had McDonald’s for dinner because that’s where they went on their first date (of course, because the bride wasn’t old enough to go anywhere else). She spent the whole night dancing in a circle with her teen friends like it was her sweet 16 or something, while he drank with his 30+ buddies.” – msstark

“At the start of the reception, the father of the bride stood up to tell everyone that dancing is a sin, so therefore there would be no dancing. He also said no alcohol, for I think similar reasons (it’s not the other dry wedding I’ve gone to, but it’s the only one that looked down on alcohol). The father of the bride later chided the groom in front of everyone for not asking him for permission to marry his daughter. They seemed pretty into modesty, so I was surprised that they still did the garter toss…although, they did this by bringing the couple and single men into a separate room and closing the doors.

They had privacy for it, but it came off as this weird fun-but-shameful thing (I’m still confused as to why dancing is sinful because of sexual connotation, but a dude going up his bride’s skirts to throw lingerie to a crowd was acceptable).” – __pigeon__

“The one where they didn’t do assigned seats for the dinner, and they had a buffet. Neither is bad if done well, but this was not. The family couldn’t be seated together because by the time the receiving line was over the tables and chairs were mostly taken so they had to be all split up. There were no servers for the buffet, so it was basically a free-for-all and they ran out of some dishes before everyone even made it through the line the first time.” – drunkenknitter

“Husband’s family is super religious (I forget the denomination but it’s the one where you can’t dance or listen to music that’s not “Godly”). The bride is still super religious but not the same brand. Anyway, we went to the wedding and the bride wanted a father-daughter dance. But then during the whole thing, the groom’s entire family walked out… so awkward!

At some point, a few of the groom’s friends raised their hands up and were swaying but we’re told by the family to stop because that was making the groom’s family uncomfortable.” – nepaligirl

“The officiant’s message was this whole thing about mixing purple and green sand to make the color gurple.” – Dalyro

“The wedding wasn’t bad, it was so fun actually! Ceremony though was super cringe. The pastor decided it was a good time to go on and on about how marriage is between a man and a woman ONLY. We have a large number of gay men there. We worked in theater production. He also went on to bring up current politics, abortions, and a woman’s job to please a man.” – TenaciousToffee

“During the wedding party, some of the family of the groom planned/“pranked” the party by dressing in Teletubby costumes and running around to the theme music. Instead of Teletubby masks (that would match the costumes) they had plain cheap white plastic masks from the costume store. It was complete nightmare fuel. Children were crying and it was all I could do not to leave on the spot.” – crimison

“An outdoor wedding in November by a lake… it was freezing and hilly. I felt bad for elderly guests who had to walk that. During the ceremony, the officiant bumped into their sand bottle where they had just both put in their sand to represent unity or whatever. The bottle broke and sand went everywhere. The reception was in a tent and was freezing. Everyone wore their coats the whole time.” – dc599152