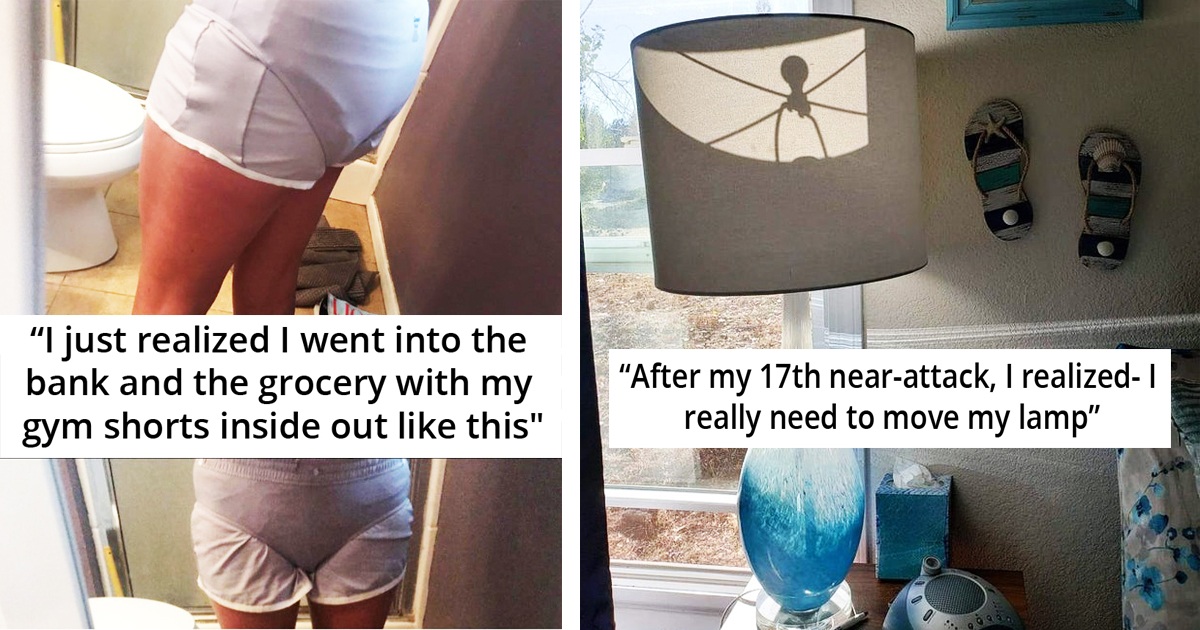 20 Moments Captured On Camera When People Almost Lost It

You’ve been there where you keep asking where is the phone that you’ve been holding in your hand. You hate not finding it, but after that, you hate just how stupid you can be at times. However, these people are having the worst moments in their life, almost losing it before they realize it.

Some people just wanted to clean their electricity socket; some want to survive from a possible invasion of their bathroom demons. But no, nobody was hurt or died in any of these pictures—just amazed people who really want life to stop doing this to them.

“Was going to paint today and found this surprise.”

“Spent 10 minutes looking for the drip tray for the Forman grill, after I turned it on.”

“Taking the pill half asleep and later seeing this.”

Who of you enjoy watching horror movies? Some of us avoid them because we hate not being to sleep or go to the bathroom after that. Some are avid horror movie lovers, always looking for even scarier movies of demonic possessions, poltergeists, and urban legends. Interestingly, however, a survey conducted by a research team from the University of Turku, Finland, shows that more than 70% of people reported watching at least one horror every half a year for the ‘excitement.’

“I somehow forgot to put water in the cup before microwaving the ramen. My throat burns and the house smells disgusting.”

“Just finished braiding my hair when I found this strand on the back of my neck.”

“Accidentally pushed broil instead of bake.”

“Soaking my hands in milk to help cut through the chili oil from prepping jalapeños. No I didn’t wear gloves. Yes, I tried to put my contacts in anyway. Yes, I’m an idiot.”

“Forgot to pack my gym shoes.”

“I guess this is why I shouldn’t put my coffee next to my paint water.”

“After my 17th near-heart-attack, I realized- I really need to move my lamp.”

“Just got home after a month out to find the water running in the bathtub.”

The scariest part about horror movies? Professor Lauri Nummenmaa from Turku PET Centre explains the ‘two types of fear that people experience.’ “The creeping foreboding dread that occurs when one feels that something isn’t quite right, and the instinctive response we have to the sudden appearance of a monster that makes us jump out of our skin,” said the professor.

“I do calligraphy. I misplaced the circled in character, which is part of a 300 word scroll that I almost finished after 5 days of work, 200 characters in.”

“Someone didn’t put the lid on the paint.”

“A tree fell on my house yesterday. I just realized I went into the bank and the grocery with my gym shorts inside out like this.”

“We only ate pancakes on special occasions. Today I learned the syrup we had been using expired 7 years ago.”

“I was about to pour myself a drink and realized 2 of my ice cubes were actually pizza rolls. Maybe I don’t need that drink after all.”

“So my mother found a post on Facebook about how you can boil an unopened can of condensed milk to make the caramel. The first few times, it worked great. This last time she fell asleep while it was boiling.”

If you think only scaredy-cats can’t sleep after a horror movie, think again. Dr. Pamela Rutledge, director of the Media Psychology Research Center, also explains, “Even the post-horror euphoria some feel is activating, not relaxing. Thus, even for those who enjoy the emotional roller coaster, horror and suspense films can make it harder to sleep.”

“I once forgot to close the bedroom door for the cat and woke up to terrible sounds thinking demons are swarming. Turned on my phone’s flashlight to see this.”

“We were watching horror movies and I hid behind my friend’s shoulder when it’s scary. i forgot to wash off my makeup and look at my eyebrows.”

So, you may be a lover of horror movies and stories and don’t get scared of those. But even then, the euphoria and adrenaline will still prevent you from sleeping.