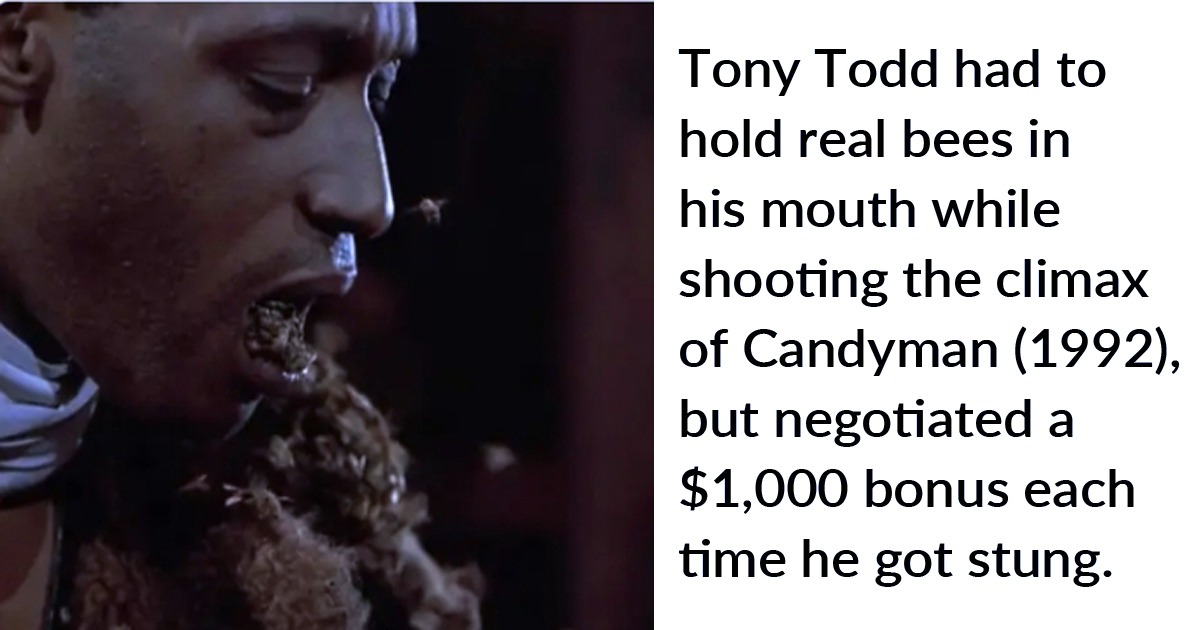 Movies have the magical effect of suspending our real-life; for a moment, the audience is teleported to a distant world full of creations that might be fantastic or otherwise so chilling we have to pause and reconnect with reality.

Horror films are specifically created to scare the living daylights out of us. Even then, some films in this genre can be so chilling that we resort find comfort in remembering that they’re all fiction. The chilling set, smart script; creepy special effects, makeup; and convincing actors do a great job in ensuring the target audience grab at their seats in horror. But while you might think that horror movies are more frightening to watch than they are to make, there are some who might say otherwise.

As we have discovered the set sometimes has more drama than even the silver screen.

Check out some of the behind scene facts from popular horror movie.

1. Alex Wolff was willingly going to break his own nose on a desk for a classroom scene in Hereditary (2018), but director Ari Aster wasn’t going to let him.

“I said to Ari when that scene was coming up, ‘I will do it on a real desk, just tell me.’ And he said, ‘I love you and thank you but that is definitely not allowed,’” Wolff said. “So, he said, ‘We’re going to get a soft cushion desk.’ It had a foam top but it was hard on the bottom. I remember after, I was just panting, my voice is gone, blood is dripping down everywhere, and blood is gushing down my knee — real blood gushing down my knee because I slammed it against a chair. I couldn’t move my arm, my complete ankle was swollen — it looked like a balloon.”

2. While filming Carrie (1976), Sissy Spacek was so captivated by her role that she slept in her (fake) blood-soaked gown to preserve continuity

“She had a trailer pulled behind MGM Studios in Culver City, and she slept in that blood for three days,” co-star P.J. Soles said. “I was like, ‘You’re amazing that you would want to sleep in that sticky, icky stuff.’ And she was like, ‘No, it’s got to match, I want it to look great!”

3. While filming Mother! (2017) Jennifer Lawrence Went to such a dark place that she needed happy things on set to retreat to when things got “too dark and scary.”

“It got to such a low point eventually that I had to bring the Kardashians in. Not in person, obviously,” Lawrence said. “I had to do this one scene, I had never gone that dark before, so I started getting scared of myself a couple days beforehand and I was like…I need a tent, away from the extras, just because I didn’t know what I would do. So in there I just had a computer playing the Kardashians.”

4. E.T. the Extra-Terrestrial (1982) was originally planned as a horror film

The project was initially titled Night Skies and was planned to be a sequel to Steven Spielberg’s Close Encounters of the Third Kind. However, while filming Raiders of the Lost Ark, Spielberg had a change of mind influenced by a much lighter script written by Melissa Mathison he was reading at the time. After some changes Night Skies became Poltergeist — but mantained it’s director Hooper.

5. Lupita Nyong’o would stay in character while casting for Us (2019) in order to maintain the difficult emotion — This regularly terrified her co-stars.

“She really kind of spooked me out a little bit,” co-star Shahadi Wright Joseph said. “She would really get into character and wouldn’t talk. It was kind of creepy.”

6. Patrick Wilson and the crew were terrorized by a heavy curtain while filming The Conjuring 2 (2016).

“It was a huge curtain that went from the floor to the ceiling, which was just sort of waving violently and there was no door open or no fan on,” Wilson said. “That was a very, very odd occurrence because nothing else was moving around it and nothing else was blowing. You didn’t even hear any air, but you watched these curtains sort of violently going. It was pretty trippy.”
Eventually, things on the set got so weird, a priest was called in to bless the set and rid it of any negative energy.

7. Tony Todd had to hold real bees in his mouth while shooting the climax of Candyman (1992), but negotiated a $1,000 bonus each time he got stung.

“After every shot, [the bee handler] would vacuum them up into a little soft pouch and take them back to their dressing room. Tony only had a dental dam to prevent them going down his throat,” director Bernard Rose said. “He was very courageous — it’s such an unsettling and stunning image when the bees emerge from his mouth.” (for the record…he was stung a total of 23 times.)

8. While filming The Babadook (2014), the titular character’s design was inspired by Lon Chaney’s look in the lost film London After Midnight (1927).

Writer/director Jennifer Kent has stated on occasion that the look for her accidental gay icon was inspired by the classic film master of monsters, Lon Chaney. Specifically, his look in the film, London After Midnight. In a way, The Babadook is actually keeping his look alive today since the prints to the classic London after Midnight film were lost in an MGM fire accident.

9. luxury brands were not willing to let their products be used during any of the murder scenes in American Psycho (2000).

Rolex permitted any actor in the film to wear their watches for their characters except for Christian Bale’s Patrick Bateman, which resulted in the iconic line from the book, “Don’t touch the Rolex” being changed to “Don’t touch the watch” in the film. Also, Calvin Klein pulled out of having their underwear featured during a rather gratuitous scene.

10. Tobey McGuire and Kirsten Dunst were the first picks for the lead roles in Final Destination (2000), but they passed and the roles went to Devon Sawa and Ali Larter

The two still went on to work together when they co-starred in Spider-Man (2002) two years later.

11. The ghosts that terrorized the set of The Exorcism of Emily Rose (2005) were really big Pearl Jam fans.

“Two or three times [during filming] when I was going to sleep, my radio came on by itself,” actor Jennifer Carpenter said. “The only time it scared me was once because it was really loud and it was Pearl Jam’s ‘Alive.'” Carpenter also noted that her co-star, Laura Linney, had a TV that would switch on and off by itself throughout filming. This is some real-life freaky stuff.

12. Fact, There were more jump scares on the SET of The Exorcist (1973) than in the actual movie.

Director William Friedkin devised ingenious tactics to get his cast really terrified while on set. He employed everything including purposely lowering the temperature on set to make the actor’s uncomfortable, blaring loud music through loud speakers between scenes, to random gun shots nearby to get genuinely scared reactions. Well, they worked, but we can only imagine how terrified the cast was.

13. Freddy Krueger’s infamous sweater from A Nightmare on Elm Street (1984) was made to be tacky

The lead actor Wes Haven picked the infamous colour scheme. His choice favoured the colours red and green after he read in a science journal that red and green together were “the most difficult for the human eye to perceive correctly”. He wanted to add to the natural discomfort of seeing Freddy in the flesh