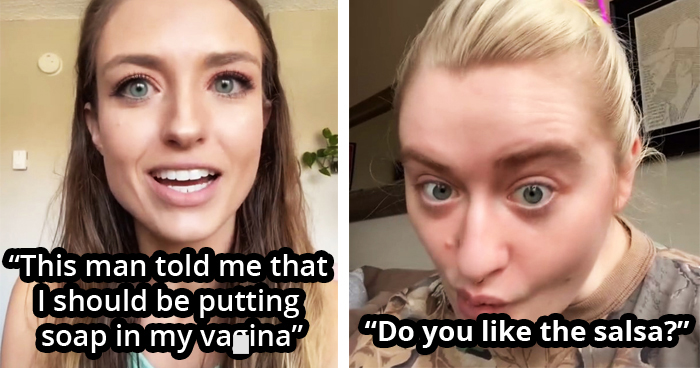 Just imagine being on your period and getting explained about like you’re 13 and experiencing it for the first time, except that you’re now 26 and know your favorite brand of tampons, as well as considering other eco-friendly products to use at this point.

Mansplaining is a disease that needs to be eradicated. Men have to be taught that women now have equal opportunities in getting an education, and Google is available to everyone. There is no excuse to be ignorant or, even worse, acting all-knowing on topics they clearly are no expert on.

We’ve done this before. We are doing this again: stupidest mansplaining moment ever going viral on TikTok.

“He didn’t know what mansplaining was… so I told him. And then he mansplained mansplaining… to ME.”

“So, this one time, I was showering with a man and cleaning my lady parts. Knowing that I’m prone to UTIs and yeast infections, I clean it a specific way which includes not putting soap up my vagina. This man told me that I should be putting soap IN my vagina.”

“When I explained to him how that can actually irritate the pH levels in the vagina, and it’s actually advised not to do that, he took the soap and put it on my vagina, and then explained to me how soap is important when you’re cleaning a vagina. And then, I got a yeast infection.”

First off, this really sounds like an assault unless that ‘man’ she’s showering with was her (hopefully ex) husband or boyfriend. The NHS advises against using perfumed soaps or antiseptic to clean that sensitive part as some women show allergic reactions to it.

They suggests using plain, unperfumed soaps if you’re one of those who experience this. There are some women who don’t see the difference even when they use unperfumed soaps and that’s totally fine!

“A man told me I didn’t really understand grief and he explained it to me.”

“When I was in high school, a good friend caused her own death by carbon monoxide poisoning. When I was in college, my mother was killed in a car crash and my dad died of a broken heart shortly after; I had a series of reproductive losses by miscarriage; I had a good friend cause her own death by gunshot, another died from an aneurism, a third to breast cancer, another to stroke, and, of course, there have been heart attacks. My brother-in-law died of COVID and my husband died three years ago of lung cancer. My master’s thesis is on grief and bereavement. I’ve written a book. My doctorate is in clinical psychology… And yet, a man told me I didn’t really understand grief and he explained it to me. Who has he lost in his own life? His dog died when he was 12.”

“I was working out at the gym and warming up for squats when a man stepped onto my platform and asked if he could spot me.”

“He proceeded to mansplain the mechanics of a squat. He showed me where to put the bar on my back, how my feet should be positioned, and how I should breathe. I finally had to interject and let him know that 1) I was a personal trainer, 2) [I] was a competitive powerlifter, and 3) had a national-level powerlifting coach.”

Tory Bae who was raised in Minnesota is married and are happily taking care of a dog together with her husband. She is a creative woman who makes bookmarks, stickers, and draws in her free time. But she is also a competitive powerlifter, who lifter 253 lbs in her last competition in 2018.

“One time, my boyfriend’s dad tried to explain to me how the spacing of studs worked in a wall… I’m a CARPENTER!”

“I once had a man break down exactly how much pain women feel during childbirth after I told him I had delivered two nine-pound babies, without an epidural. Like, sir, I did not stress test my taint just to have an illiterate argue with me about it.”

“He tried to explain to me that Copenhagen and Denmark are both towns in Sweden.”

“He said, ‘Yeah, I know you’re dressed as Mulan, but I didn’t know if you’ve seen the movie or not. I wanted to let you know.'”

“I was playing ‘Mulan’ at Disney World, and this little girl comes up to me and goes, ‘Hiyah! Hiyah! Hiyah!’ which is very common for little kids to do. And her dad looks at me and, I swear to God on my life, he says, ‘Oh she’s doing that because in the movie ‘Mulan,’ Mulan fights in the war against the bad guys. And I said, ‘You mean me?’ He said, ‘Yeah, I know you’re dressed as Mulan but I didn’t know if you’ve seen the movie or not. I wanted to let you know.'”

“I once had a man mansplain to me my own name.”

“My name is Niamh, it’s Irish. So I met this guy, he had only ever interacted with me on WhatsApp, and so he said, ‘Oh you must be Ny-am.’ And I said, ‘Oh no, it’s Niamh, it’s pronounced like this, it’s the Irish language.’ And he goes, ‘No, it should be ‘Ny-am.’ And I was like, ‘No, it’s my name. It’s a different language.’ And he was like, ‘But there’s an ‘M’ in it. It should be Ny-am.’ And he just kept going and going as if I needed to get through my tiny woman brain that I was pronouncing my own name wrong for 22 years of my life. He wasn’t an Irish speaker or a native English speaker, he was Greek.”

Her name, Niamh, was possibly the same as the otherworldly woman Niamh of Tír na nÓg, daughter of the King of the Land of Youth, that was married to the greatest Irish poet in the Fenian Cycle of Irish mythology, Oisín. Her story was told in a poem by Mícheál Coimín from 1750.