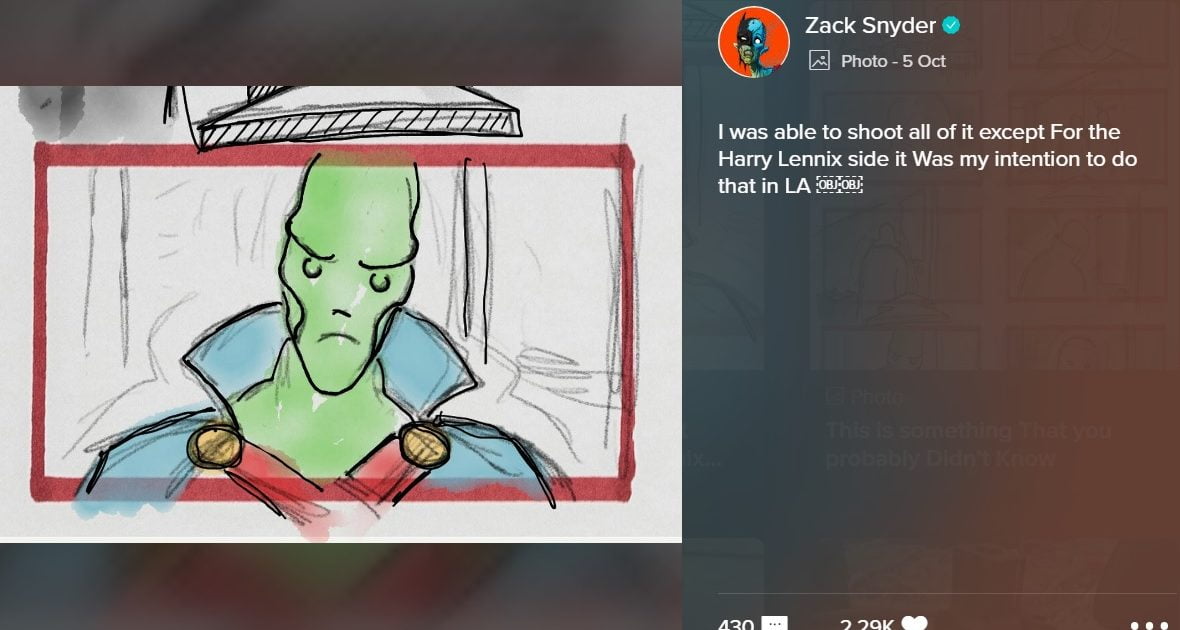 He was there all along. We, the Snyder true followers, have been right to believe in this person’s vision of a greater future that might never happen. Martian Manhunter was there all this time, proven by the storyboards Zack Snyder released on VERO recently.

The tag #ReleaseTheSnyderCut has been raging on for years by now with Jason Momoa, Kevin Smith and even Snyder himself confirming it. ‘Justice League’ long hailed to be the line-up of superheroes that will top Marvels’ Avengers became a flop after an, unfortunately, incident befell Snyder’s family.

That said, he had a beautiful vision and want it to be shown in theaters.

In the storyboard, it’s shown that John Jones or J’onn J’onzz was actually transforming into General Swanwick. He hasn’t, however, disclose what his purpose was or why was he not helping with the fight against Steppenwolf.

“I was able to shoot all of it except for the Harry Lennix side. It was my intention to do that in LA.”

It never happened and we knew Joss Whedon did a whole bunch of reshoots with the ‘Justice League’ that made it to the theater. Now that we know that one was disappointing, we wished Snyder was allowed to finish his vision and that Warner Bros. had not been rushing with remaking everything.

Henry Cavill and Ben Affleck have also left what may have been another incredible franchise that is on par with Marvel and may even surpass it thanks to their more serious tones that appeal to the adults who used to read DC comics today.

But the fans never gave up: we want to see what he actually had done with his own cut.

But WB is too deep in with their rushed overhaul of parts of their franchise. ‘Wonder Woman 1984’ and Robert Pattinson’s ‘Batman’ have been confirmed while ‘Aquaman 2’ may remain a sequel to its previous movie. While ‘Joker’ has recently hit the theater, it seems to be a standalone whose aim is to make a statement rather than being part of the franchise.

Jeff Bezos Reveals The Secret To His Success: Getting 8 Hours Of Sleep November 26, 2020

30 Women Who Embraced Their White Hair Thanks To This Hairstylist November 25, 2020

Cardi B: ‘Can’t Be Sexy In Peace’ In Her Thirst Trap Video With Daughter’s Cameo November 25, 2020