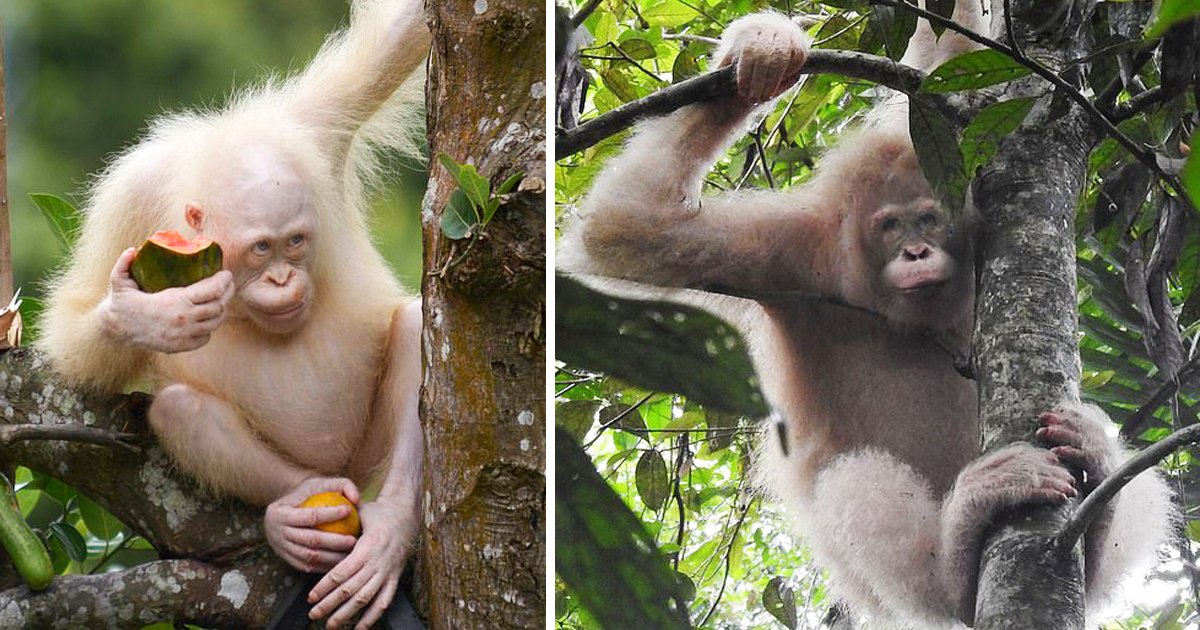 The world’s only recognized Albino Orangutan is spotted alive and healthy in Borneo Rainforest, years after it was freed into the wild.

The blue-eyed-Primate, identified as Alba was taken from a cage in 2017 where she was being kept as a pet by locals in Kalimantan, an Indonesia’s part of Borneo.

Alba, 6, a blue-eyed Orangutan is spotted alive & healthy in Borneo Rainforest, years after it was freed into the wild

Alba, which implies white in Latin was then released into the wild in the 4th quarter of 2018. Discovered by the Borneo Orangutan Survival Foundation in Tanggiran Village, Kalimantan, Alba was critically underweight from inadequate food, suffered dehydration and was riddled with parasites.

The foundation believed Alba had become separated from her mother right before her capture. At that moment, she couldn’t return back to the wild as a result of her health issues relating to Albinism, which in turn could make her vulnerable to hunters.

Albino species of Orangutan can suffer from poor hearing and eyesight as well as at risk of developing skin cancer in the long run. The conversation, however, revived Alba to good health and in June 2018 relocated her to a 10-hectare man-made forest Island in Kalimantan, near the group’s Orangutan Rehabilitation Centre.

A public $80,000 fundraising to purchase land for the special reserve is still welcoming donations. Alba, a 6-Year-Old Orangutan was, on the other hand, joined in her new location by three other Orangutans – Radmala, 4, Unya, 4 (male) and Kika, 6.

The Orangutans receive round the clock observation by staff who monitors their behavior and health. In December 2018, Alba was later transferred to Bukit Bukit Raya National Park following an over 24-hours journey from the rehabilitation center.

The Natural Resources Conversation Agency reached an agreement to release Alba into the wild because she had become physically strong and has also learned some essential behaviors for survival.