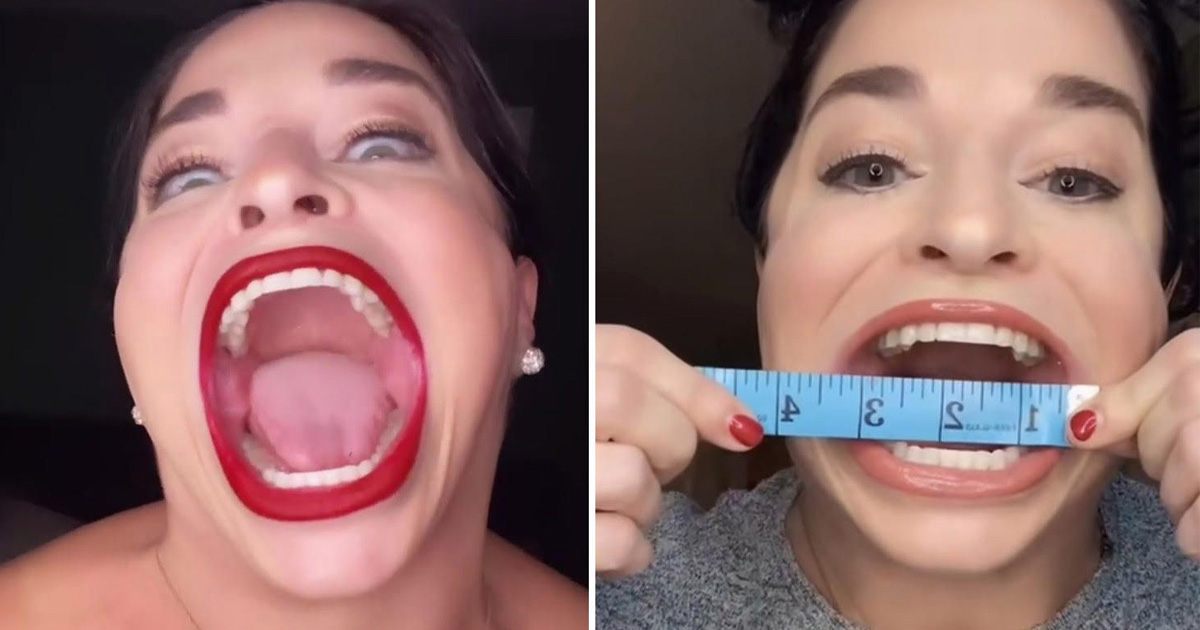 Woman With ‘World’s Largest Mouth’ Earns $14,500 For Every Video

With over 800k followers on TikTok, Samantha Ramsdell is a proud owner of possibly the biggest mouth in the world. The 30-year-old likes to make jokes and videos related to her mouth because many people like to comment on her trait.

She decided to measure it when someone commented that world’s largest mouth is about 3.75 inches or 9.52 cm.

Her most popular videos are the ones where she was asked to eat things with her mouth. Because, unlike most people who take two bites, Samantha doesn’t have to do that. She can fit it all in her mouth!

In a TikTok video, she explained how the facial feature has helped her earn roughly $14,500 for each video she posts.

This is with a Chipotle…

This one, she chomps down a Subway with her ginormous mouth.

When she stretched it, Samantha thinks that she might have beat current record holder on Guinness because stretching from upper to lower lips, it almost reached 4 inches.

Samantha is from Connecticut and works as a sales representative. She made a TikTok account back in fall 2019. But it wasn’t until the lockdown did she began posting regularly, initially containing her performance. Samantha said, “I’d make a lot of funny face videos, comedy skits and singing parodies. But any video involving my mouth and the faces I can make always went crazy viral.”

And Samantha also shared that her popularity has earned her some bucks from TikTok! At 0.3 cents per 1,000 views for top creators, she’s had 50 million views which were definitely worth the multiple times she filmed herself chomping on Subway with a mammoth-size bite.

But Samantha does get upset sometimes when she’s called a ‘one-trick pony’ and how only videos on her mouth gets so much press. She also wants people to know more about her singing and comedy skits! Yet, she can’t help but feel appreciated when her video eating a Subway went so viral it had almost 14 million views, while another where she explains about her jaw had 5.8 million views.

She also shared her childhood pictures where she gave the biggest smiles ever!

Of course you want to know if it hurts. Samantha said, “Some people ask me like, does it hurt?” She stretches her mouth to unbelievable length and answered, “No.” With her mouth stretching in all kinds of directions and shape.

She does collab with people, too, and credit her big mouth for her voice!