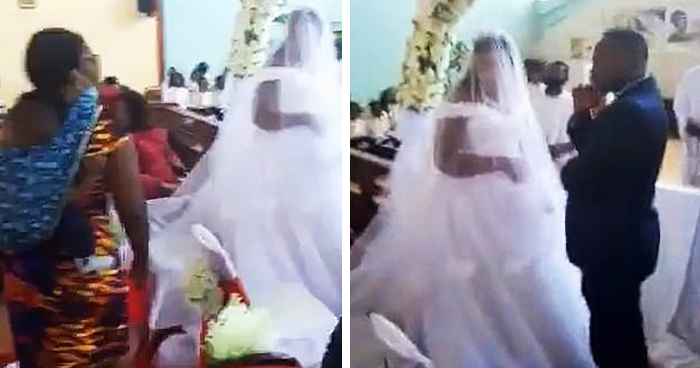 Marriage isn’t perfect, but after being together for decades, couples definitely have a thing or two figured out. Honesty, empathy, and even compliments go a long way in every relationship. The aforesaid is, however, a reverse case for a man who had told his wife he was heading out of town for work only to end up in the church to get married to another woman.

A viral clip of Abraham Muyunda, from Zambia, showed the father-of-three on the verge of tying the knot with his newfound lover before his angered wife stormed into the church, demanding the ceremony be put to an end because the groom was her husband.

A viral clip shows the dramatic moment a woman disrupts a wedding ceremony in Zambia, claiming the groom is legally her husband

Reportedly, the woman had held about the wedding from their neighbors, and just like any woman would react, she marched up to the aisle with her children and furiously announced to the congregation that the wedding can’t go on. Sparking an outrage among the congregation, the groom, staff at the Zambia Revenue Authority stared on with his hand on chin while the new-bride was left stunned.

As seen in the clip, Abraham’s wife had a face mask on while arguing with a woman in a front pew. Shortly after, she went ahead to explain herself to a clergyman. ‘This man is legally my husband. We haven’t divorced and we’ve never fought, so I can’t explain what’s happening here.’ The woman said. The incident transpired in a Roman Catholic Church in Chainda, an area of the capital Lusaka.

Nevertheless, the clip cuts out before the whole argument is resolved, but reports acknowledged that the groom was arrested and taken to the nearest police station. The families, on the other hand, are still in discussion on how to respond to the startling incident. And interestingly, the bride is said to have been aware that Mr. Muyunda was legally married, but if convicted of bigamy, he could be imprisoned for seven years.