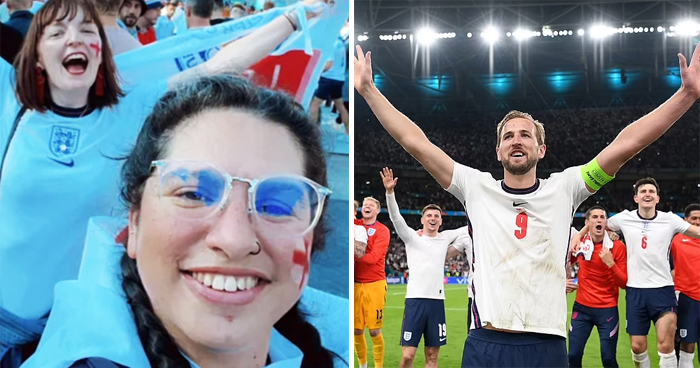 Nina Farooqi escaped work at decking and cladding firm Composite Prime in Bradford, West Yorkshire after her close friend won last-minute tickets to the Euro 2020 match: England Vs. Denmark. Nina had reportedly felt she would unlikely be granted the day off to attend due to work being short-staffed, so she pulled a stunt of calling in sick.

Nina Farooqi (left), 37, is fired for calling in sick only to be seen at England’s semi-final game.

Unluckily, the face of the digital content producer from Ilkley, near Bradford, was shown worldwide when a TV camera zoomed in on her and her friend celebrating England’s goal. 37-Year-Old Nina sitting behind the goal even surfaced on TV presenter Stacey Dooley’s Instagram story, which she shared with her friends.

The digital content producer was shown worldwide when a TV camera zoomed in on her and her friend.

Nina’s celebration even made it onto a celebrity’s Instagram feed.

At about 6 a.m. the following day, while catching up with a train back up north, Nina got a phone call from her boss, who told her not to bother coming in. Director at Composite Prime, Charles Taylor has claimed the company was left with no choice but to sack Nina. He equally shared that he would be giving company staff Mondy morning off to recover after Sunday evening’s final against Italy.

Director at Composite Prime, Charles Taylor, has claimed the company was left with no choice but to sack Nina.

Taylor shared that he would be giving company staff Mondy morning off to recover after Sunday evening’s final against Italy.

“It’s an exciting time for everyone in England, and given the opportunity, we would have encouraged attendance to such an important football match. Unfortunately on this occasion, our employee lied, taking one day off sick to attend the football match on Wednesday 7th July.” Taylor told Daily Mail.

Nina had felt she would unlikely be granted the day off to attend due to work being short-staffed.

Likewise, Nina thought it would be unlikely she would be spotted in a crowd of over 60,000. Here’s Harry Kane and the England team celebrating after the win.

He added: “This was in breach of her employment contract, and so we had no choice but to take the appropriate action. As a business, we value honesty and integrity, and we don’t tolerate any employee taking advantage of our policies. Like many businesses will be doing across the country, our staff will be having Monday morning off to hopefully recover from celebrating an England win!”

Thousands of jubilant fans were spotted at Wembley Stadium after England’s win over Denmark.

In a separate interview with The Daily Telegraph, Nina claimed she holds a bit of regret as no one wants to get fired. “They said they’d seen I’d been at the game, and I was honest about why I did it. But I didn’t get any sympathy at all, and they said that’s it. That’s their call and the consequences of what I did. There is a bit of regret, no one wants to get fired, but then I would have hated the regret of missing out. I’d do it all over again.”

However, Nina claims she would have hated the regret of missing the game.

Nina has since got support friends in women’s football, and at the moment, she’s engaged with freelance jobs.

Nina’s shared that her office job funded her love for football. Her freelance lifestyle includes a photographer and video producer in the men’s club game across the Women’s Super League. However, since the incident, Nina added that her community of friends in women’s football has rallied around her since she lost her job at Composite Prime. At the moment, she has quite a lot of freelance work at hand.