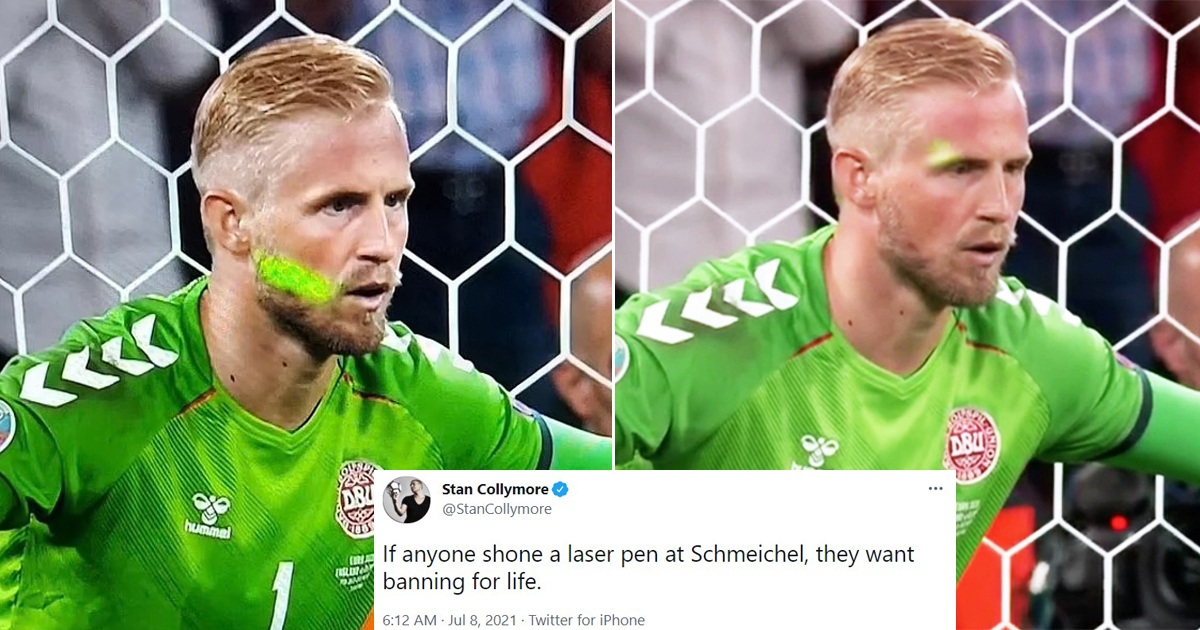 During the Euro 2020 Semi-Final game, someone in the crowd at Wembley had pointed a laser at Denmark Keeper Kasper Schmeichel’s face just as he was gearing up for Harry Kane’s penalty attempt. Despite the interference, the seconds eventually saw Harry Kane struck in a rebound, which sent the Three Lions to the final with a 2-1 victory.

However, Stan Collymore – a former Liverpool and England star, has led the calls for the England fan who shone a laser at Kasper’s face before Kane’s penalty to be banned for life. “If anyone shone a laser pen at Schmeichel’s, they want banning for life.” Stan wrote on Twitter. Multiple fans supported the message and equally condemned whoever had done it.

Liverpool and England striker Collymore had led a call for the fan to be banned for life.

Absolutely shocking that this was allowed to happen! Someone used a laser pen on Kasper Schmeichel!!! pic.twitter.com/73goP3J00a

One person wrote: “Whoever showed that lase to Schmeichel’s face deserves a permanent ban from Wembley and further England games.” Another added: “Whoever shone that laser pen in Kasper Schmeichel’s face wants banning for life.” A few people shared that the game’s outcome was unfair, with England going on with the match after Kane converted the rebound.

Despite the interference, Harry Kane’s penalty goal still struck in a rebound.

Multiple people, including England fans, have also criticized the supporter in Wembley.

A third fan stated: “A laser in Schmeichel’s eyes during the penalty, too now I see. Really difficult to feel that this is a fair result.” Another claimed the laser didn’t affect Kasper as he was still able to make the save but insisted there’s no excuse for the ‘stupid’ supporter. “That laser pen incident was stupid, and there is zero excuses/ justification for it. I’d ban that fan for life. That said, it didn’t affect Schmeichel, considering he saved the penalty. Still, a very poor incident.”

A few shared their opinion on how bad of a look it was for England fans. “Unbelievable. Someone in the crowd was pointing a laser into Schmeichel’s eyes as he was trying to save the penalty Sterling dived for. Horrible look for England this. Disgraceful.” A fan stated. It turned out the laser wasn’t the only controversy that surrounds the game. Denmark couldn’t believe Joakim Maehle’s tackle on Raheem Sterling was enough to warrant a penalty, and another ball was on the pitch when it occurred.