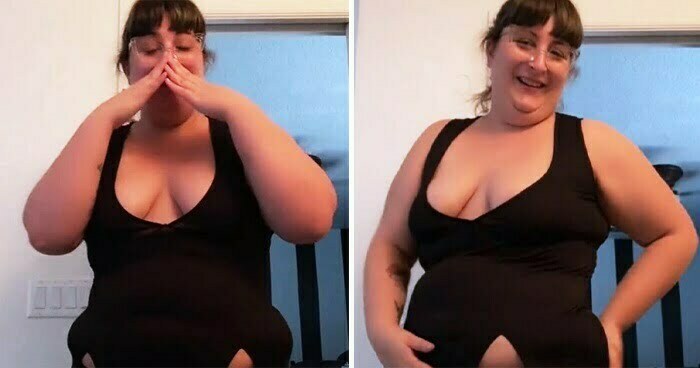 A woman who goes by the nick Girlfriend on TikTok was dying from laughter after she received her Amazon order. The little black dress she thought would look cute had ended up looking like someone was really cutting corners in making it.

The TikTok user decided to show what it looks like on her body.

“So I bought a new dress off Amazon. It looked really really cute online but on me… I’m just dying,” she said in the video. “This is the dress. I’m laughing because I just can’t decide what to do.”

“I’m giggling, sorry, because it’s funny to me – I have a very cute body but I’ve been duped by Amazon, dammit!”

People were complimenting her and commented that she looked just fine. But obviously, she couldn’t stand the way it wouldn’t even cover her underwear!

It was one of those typical fails while shopping online, but scroll on to see how she fixed it!

In an update video, she wore the same dress with a lot of altering from her.

She gave it a goth vibe by adding a corset a small ribbon on both sides.

The plunging neckline and the over-the-top slits were solved. Watch the end result below!