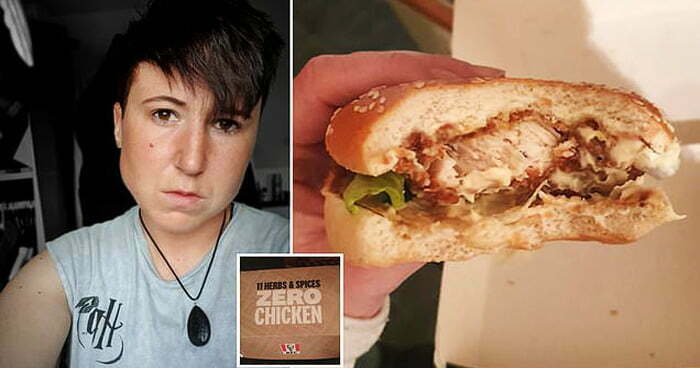 A vegan was left heartbroken and sick after accidentally eating a chicken when KFC got her plant-based burger order wrongly.

The Vegan – Nick Kent, 27, joined the vegan world since 2015 and had been keen on trying out the shop’s new meat-free burger with her sister, who is also a vegan.

The sisters ordered their burgers from the Clifton store in Nottingham and requested it was takeaway. And after Ms. Kent’s sister took a bite of hers, she realized the staff had got their order wrong.

Nick Kent, 27, joined the vegan world since 2015 and had been keen on trying out the shop’s new meat-free burger with her sister, who is also a vegan

Being lactose intolerant, meaning she felt sick after also accidentally eating cheese, Ms. Kent explained: ‘I instantly felt sick. I was heartbroken and it has been a long time since I first became vegan. I went to brush my teeth after.’

Ms. Kent revealed the box was labeled ‘Zero Chicken Burger’ on the side with a caption that reads: ‘Finger Lickin vegan. Until you add non-vegan stuff, obviously.’  Taking a bite without thinking, Ms. Kent said she had trust in KFC to put the correct burger in the box.

Ms. Kent’s sister, who asked not to be named, took a bite of hers but realized staff at the Clifton KFC in Nottingham had gotten the order wrongly

She continued: ‘You know when you are very hungry and don’t want to chew. I waited a long time for it so I was hungry and wanted to enjoy it all. Luckily for me, it wasn’t a big bite. I have been vegan for 5years so I know so well, it’s wasn’t any plant-based stuff. I could feel all the skin going down my throat.’

‘My sister picked up the burger and checked for me. I should have checked, but honestly, I should not have had to. I am not a militant vegan but was so grateful that KFC was trying to do something, a place I and my family could always go. I feel disappointed. It’s clear KFC doesn’t care about vegans or about animal welfare. It’s all about the money.’

The box was labeled ‘Zero Chicken Burger’ on the side with a caption that reads: ‘Finger Lickin vegan’

The KFC recipe Quorn Burger was, however, launched on January 2nd, 2020.

Responding, a KFC spokesperson said: ‘We are sorry for what happened with Nic’s order. We honestly got it wrong on this occasion. We are offering a full refund straight away and a replacement Vegan Burger. We also realize it’s important we don’t slip up, most especially when it comes to allergens.’