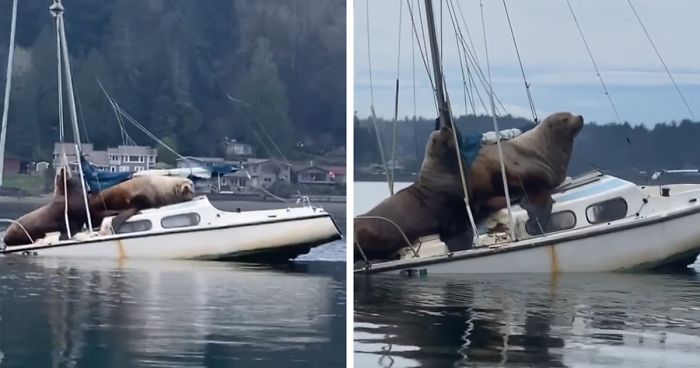 Joshua Phillips, the ex-professional soccer player was on a boat ride when he came across a hilarious scene.

Taking out his phone to record the unusual scene, Phillips witnessed a couple of giant sea lions majestically sailing around.

‘The vessels appeared a little off, but we got closer and closer. We saw two massive animals on board.’ Phillips said in an interview with The Seattle Times.

Recorded in Eld Inlet near Olympia in Washington, United States, a third sea lion was seen trying to join his friends but was turned away.

As the saying goes: If two huge sea lions dangle their flippers on a tiny boat like it’s going to sink any second, then there’s a crowd.

It’s, however, still unclear as to who owns the vessel or as to how the pair were using it for their amusement. Well, they sunk it! Specifically, sea lions grow to about 11 feet in length and weigh about 2,500 pounds, according to The Marine Mamma Center.

And Here’s What People Are Saying About The Hilarious Video