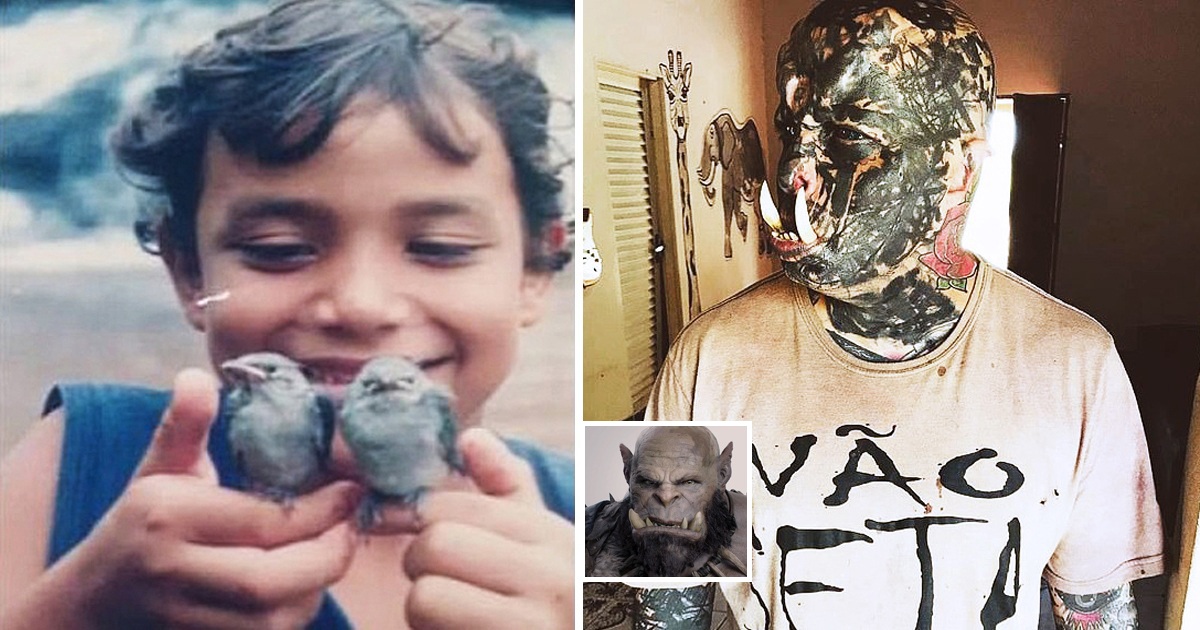 Some of us really love fictional characters that we dream of being when we were kids. Some want to be fairies, and some want to be superheroes, such as Superman or Batman.

There are also some who love tattoos and turn it into a hobby that covers most of their body. This woman calls herself the blue ice white dragon and inked her eyes blue for the ultimate dragon look before going blind temporarily.

On another side of the earth, a man also inked his eyeballs and went through body modifications.

This 41-year-old man calls himself Orc and took the extreme step to become one: getting a pair of tusks.

Just as you can see in the pictures, Orc has tattooed almost his whole body. He also has eight subdermal piercings with a number of other painful processes, such as splitting his tongue and inking his eyeballs. But the Brazilian was not done even after covering 80% of his body with tattoos.

This pair of tusks was fitted into the lower row of teeth for £400 to make him look like Orcs.

Orc got his first tattoo when he was just 15 and began undergoing modifications when he was 35. The man has his appearance seemingly based on the fictional race from Warcraft, the Orcs. But the man said, “I am trying to be myself. These are just my ideas, my inspirations coming from the heart. I am not inspired by anyone.”

Almost completely black in the face with her black eyeballs with a par of tusks jutting out, most almost cannot recognize him from who he was before this. But the man says there are many positive responses and comments from people. “They tell me good things that motivate me to continue,” said the man.

“Bad people exist everywhere and are always around… but they don’t shake me,” he continued.

He also talks about what his family thinks about his new hobby and appearance. “I was raised in Campo Grande by my parents. My mum doesn’t like it, my dad tolerates it, and my friends find it weird.”

But nothing can stop Orc from his love of tattoos and body modifications. He imparted this message to people who hesitate, “Live, be happy, travel, love. Do whatever you want.”

“Life goes by fast and death is certain.”

Is this weird? Fascinating? Check out this one for those of you who love tattoos, and this for some laughs with tattoo fails.