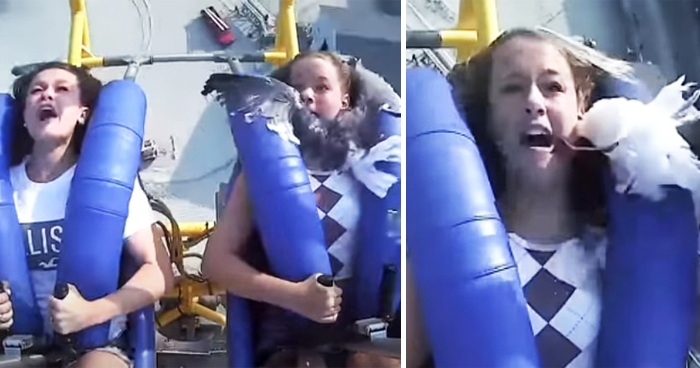 Kiley Holman tried out the SpringShot ride at New Jersey’s Morey’s Pier amusement park as part of the celebration of her friend Georgia Reed’s birthday on July 13th. Eventually, the moment took a twist when suddenly, a black-headed gull smacked into Kiley’s face during her 75mph slingshot ride at a beachside fairground.

Video shared to the internet filmed the hilarious moment, which also saw Kiley, 13, grabbing the bird and throwing it away from her. Georgia, 14, who lives close to Kiley in Weatherly, Pennsylvania, appeared unaware of the encounter as she continued screaming. She told Fox News she had no clue what had happened until Kiley explained.

Panicked Kiley was when a seagull lands her face as she goes on the SpringShot ride with her friend Georgia.

Similarly, Kiley claimed the bird must have escaped injured, although it left a few feathers behind. “I knew it was going to hit me. I didn’t know what to do, so I waited for it to spin over, and then I just grabbed it and threw it off me quick.” Kiley said in an interview with Fox News.

Georgia appeared unaware of what had happened to Kiley as she continued screaming.

Meanwhile, Georgia’s mother, Arena Reed, told Action News that she didn’t realize what had transpired until the ride had concluded. “I saw the wings fall from the vehicle, but at first, I thought they were tickets.” Arena explained. She added that the girls couldn’t stop laughing after Kiley shared a seagull had joined them on the ride.

Realizing what had happened, Kiley eventually grabbed the bird and threw it off the ride.

Nonetheless, the seagull reportedly flapped away, leaving a few feathers behind. On the other hand, Kiley has told her local TV news outlets that she has no plans to ride the Sling Shot ever again. Kiley’s action is downright courageous. Besides, how’d you have reacted if you were the one in Kiley’s shoes?