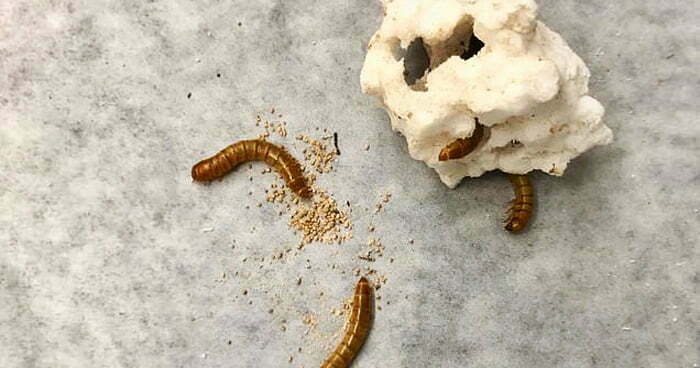 One of the world’s most severe problems with the environment is plastic. Even though millions of people made sure to throw their plastic products into the recycling bins, not all of them end up where we thought they do. In fact, in the UK alone only 57% of thrown out plastic bottles end up getting recycled.

The other half? They went to the landfill and become waste that will stay longer than we can ever live for.

But for once, a new light of hope for a solution for plastic waste has arrived: these tiny mealworms.

Scientists from Stanford University have observed that a certain species of mealworms consume through a block of Styrofoam and excreted 90% of the flame retardant that is usually added to them within 24 hours. The rest, in 48 hours. And unlike humans, these worms do not accumulate toxic chemicals in them.

“This is definitely not what we expected to see,” says Anja Malawi Brandon, a Ph.D. candidate in civil and environmental engineering from Stanford. “It’s amazing that mealworms can eat a chemical additive without it building up in their body over time.”

Co-author to most of Stanford’s studies on the miracle worms. Wei-Min Wu, said, “This work provides an answer to many people who asked us whether it is safe to feed animals with mealworms that ate Styrofoam.”

The Styrofoam contains hexabromocyclododecane, or HBCD, a chemical flame retardant commonly added to other plastic products. This chemical has been found to cause an impact on health and the environment negatively from causing endocrine disruption to neurotoxicity.

The EU is planning the banning of this chemical while the U.S. Environmental Protection Agency is investigating the risks further. Yet, almost 25 million metric tons of these chemicals have been added in 2015 alone.

These worms excrete half of the polystyrene and 90% of the HBCD in 24 hours and everything else in 48 hours. The rest of the polystyrene is turned into carbon dioxide. The scientists also added, “The researchers acknowledge that mealworm-excreted HBCD still poses a hazard and that other common plastic additives may have different fates within plastic-degrading mealworms,’ the team shared in a statement.”

“While hopeful for mealworm-derived solutions to the world’s plastic waste crisis, they caution that lasting answers will only come in the form of biodegradable plastic replacement materials and reduced reliance on single-use products.”