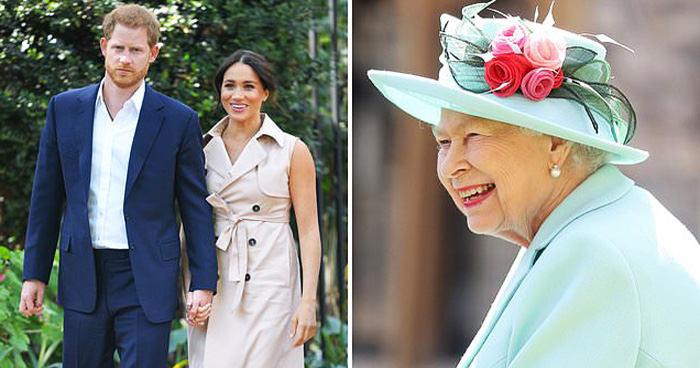 Royal staff is preparing Prince Harry to return back to the UK amid reports he could possibly face a scolding from the Queen over his recent public utterances touching on US politics.

Reports suggest that Palace staff have been instructed to ready Frogmore Cottage for the imminent return of the duke – without any mention of his wife- Meghan Markle.

Queen Elizabeth, 94, is set to resume audiences and small engagements at her ‘HMS Bubble’ at Windsor castle.

Harry’s scheduled meeting with his grandmother, the queen comes as royal experts warn it may not be pleasant as such. Its feared the prince had ‘burnt significant bridges beyond repair’ after he openly commented on the touchy subject about the upcoming American elections.

A credible royal source divuldged, ‘There are all sorts of issues to speak about — not only his political statements but also his visa situation in the US.

‘Even though he would have to isolate for two weeks, the estate is large enough for talks in a socially distanced way.’

‘In the past few months, Harry and Meghan have burnt some significant bridges that may be beyond repair,’ Penny said.

Meanwhile, representatives for Harry and Meghan have been approached for comment in the ensuing political dragnet.

Congressman Jason Smith of Missouri demanded that the British government ask the Queen to strip Meghan and Harry of their royal titles for ‘interfering’ in the upcoming American election – claiming they are using them to influence voters.

Prince Harry and Meghan made their comments in a Time 100 video to go with the publication of this year’s list of the most influential people.

‘As we approach this November, it’s vital that we reject hate speech, misinformation and online negativity,’ said Harry –

Some British and American immediately perceived this line to favor Biden and a slap at President Trump.

Trump, not known to shy away from controversy even slammed Meghan from the White House podium after the couple spoke.

President Trump Slammed Meghan from The White House Podium, Admitting He’s ‘Not a Fan Of Hers.’

‘I’m not a fan of hers,’ Trump said to a question posed by the media ‘I would say this – and she has probably heard that – I wish a lot of luck to Harry because he’s going to need it.’

Although British law does not explicitly forbid members of the royal family from voting, the expectation that royals remain apolitical is considered sacrosanct, and in practice they never participate in elections, by voting or otherwise.

In a copy of a letter addressed to her majesty the Queen and her government, Smith started by pointing out the Royal family’s long tradition of mataining political neutrality and notes that the United States is concerned over meddling of its internal affairs by foreign powers.

Terming their actions a serious breach of the British Royal Family’s policy of political neutrality and an inappropriate act of domestic interference by one of our closest allies.’

The congressman said even though the couple made their comments as private citizens, by vurtue of their titles their expressions came from a royal family and generally carried a stronger influence.

‘It is my view the titles and privileges they retain by permission of Her Majesty the Queen, given with the advice and consent of her government, prevent the Duke and Duchess from separating comments made in a personal capacity from their official position within the British Royal Family,’ he wrote.

Smith said it effectively means the British Royal Family is meddling in the American election and ultimately affecting the diplomatic agreement between both governments.

‘Therefore, by allowing the Duke and Duchess of Sussex to retain their titles, and these political comments to continue, the British Government is effectively condoning interference in the 2020 United States Presidential Election from officials at the highest level of the British establishment,’ he wrote.

He further demanded that the Duke and Duchess cease from making such comments or that the Queen strip them of their titles.

At the time, royal insiders in Britain had voiced concern that Harry and Meghan had ‘crossed a line’.

Buckingham Palace also distanced itself from Harry’s remarks by saying that ‘the Duke is not a working member of the royal family’ and describing his comments as ‘made in a personal capacity’.