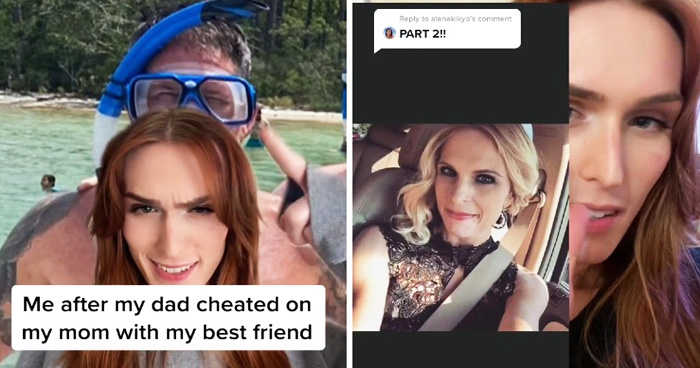 Family’s dirty laundry goes viral on TikTok! Diana, 23, shared how her father cheated on her mum with her best friend. The TikToker also revealed how her family found out her dad had been unfaithful. While the TikToker claimed she’s no longer angered, she added that it was nobody’s fault except for her dad, and there was an unfair power dynamic.

Diana joked she was sending her dad to a retirement home for cheating on her mum with her best friend.

Diana works full-time in high school at a family business even though she was homeschooled, and it turned out, it’s precisely where all of her family worked. In telling the tale, the TikToker gave her now ex-best friend a fake name, ‘Gretchen,’ and explained why Gretchen was one of her best friends even though she was three years older.

In the clip (below), the 23-Year-Old was seen dancing in front of a photo of her dad wearing scuba diving gear.

“I didn’t really have a lot of opportunities to make friends other than at work. So Gretchen and I were super close because we worked together all the time. At one point, I think she had a crush on me, and I rejected her, so she decided to go for my dad instead.” Diana said in her video, captioned: “We’re cool now, I guess.”

The conversation in the comments involved much discussion of Diana’s father’s looks.

As the conversation continued, Diana explained her parents divorced following the affair.

Numerous people pointed it to Diana that it was Gretchen all along, but Diana said she refused to believe her former best friend would betray her. “Bless my mum’s f***ing heart, she came into work and yelled at this girl in front of the entire restaurant. But despite her best efforts, cheaters are going to cheat, and they kept having an affair and kept seeing each other.”

However, Diana says her mum ended up finding love again, remarried, and is “thriving.”

Diana then showed a variety of photos of her mom in another clip (now-deleted) and added: “You could be gorgeous, but if they want to cheat, they want to cheat.” However, the TikToker said she hadn’t spoken to her dad for three years after the divorce but is now on speaking terms, and he’s no longer with Gretchen. On the other hand, Diana’s mum is thriving and happily married to someone new.