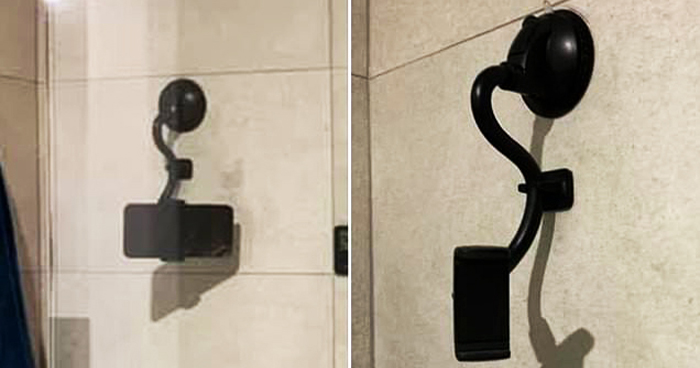 At a glance, the idea of gluing a phone stand in the bathroom sounds like a great idea. Who doesn’t enjoy a nice bath with a phone stand for them to watch a movie or two while relaxing?

But after a mom posted her lifehack of gluing a phone stand in the shower, some parents think something is up.

Kelly shared a hack to use your iPhone in the shower without fear of dropping it in there inside a popular Facebook group, ‘Cool Kmart Hacks & Styling Ideas.’ It shows a nicely installed stand that looks solid for a phone to hang there for use while showering.

Kelly said that her kids have been taking the phone into the shower to listen to music. “I was forever telling them they were going to drop it and I wasn’t getting them a new one. Until I came up with this fab idea,” she explained in her post.

But some parents are thinking about what exactly is so urgent with the smartphones that these kids had to bring it with them into the shower? One asked, “Have you questioned why they need to take their phones in the shower?”

Some people suggested that this might be a way for the kids to get their R-18 shots. But Kelly was just disgusted by those reactions, “I didn’t put this up for backlash and not all kids do that. Geez.”

One also wrote that as people who’ve been young, we ‘know exactly what that stand is getting used for.’

She got her Fix Nail Powder adhesive from Kmart and glued it to the wall of her shower. Very simple and a lot of people praised this mother for her clever solution for the phone while showering. Some people think this is great when you have to let your shampoo or other treatment that needs to sit for a few minutes when you bathe or shower.

Another wrote, “I think I’ve just found Christmas presents for my family to put in their rooms. Thanks for sharing, I think it’s an awesome idea.”

Honestly, there are also some of us who just can’t part from our music.