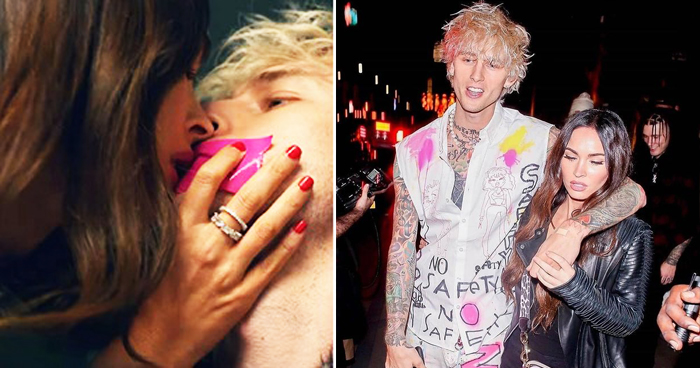 Megan Fox shared how about her feelings and experience as a part of her boyfriend’s new album release with Nylon. The 34-year-old mom sounds very much in love with the man who’s currently her whole world right now.

Speaking of her first time seeing him at the set for ‘Midnight in the Switchgrass,’ Fox said, “I looked into his eyes [and] I felt the most pristine, most gentle, most pure spirit. My heart shattered immediately…”

Fox said that MGK was an absolutely unique soul that she’s not used to socializing with. She describes their relationship to be somewhat overwhelming but also beautiful. She laughed and said, “Loving him is like being in love with a tsunami or a forest fire.”

MGK is very known for the bad boy representation, and Fox sees that as a “genuine extension of a very real rage and a very deep pain.”

The rapper, who’s also a dad to Cassie, her 11-year-old daughter, released his newest album ‘Tickets to My Downfall’ where Megan Fox had a contribution. The album immediately raised to the top rank on Billboard 200.

MGK himself is also enamored in Fox, talking about how his life as a rock star often means a lot of women. “So finding someone that can take you out of the fast lane and make sure that you’re safe, because at any minute you can crash — I love that it can evolve into that,” he continued.

Fox also said she’s never tried to control him. “It’s more that he looks to me to avoid his own self destructive tendencies. And that’s where I’m useful because on his own and left to his own devices I don’t know how much interest he has in caring for himself,” she continued.

Fox was previously married to Brian Austin Green for 10 years before they split up in May. This is their third time separating since 2015 and 2016.

She had also recently criticized his husband on a post with their kids as it was creating a narrative as if she was an absent mother. Her comment read, “Congratulations you truly are a remarkable human! Why do you need the internet to echo back to you what should be inexhaustibly evident in the way your children love you?”

Wishing the couple can find happiness together.

27 People Shared The Most Strange Stories Of ‘Butterfly Effect’ December 4, 2020