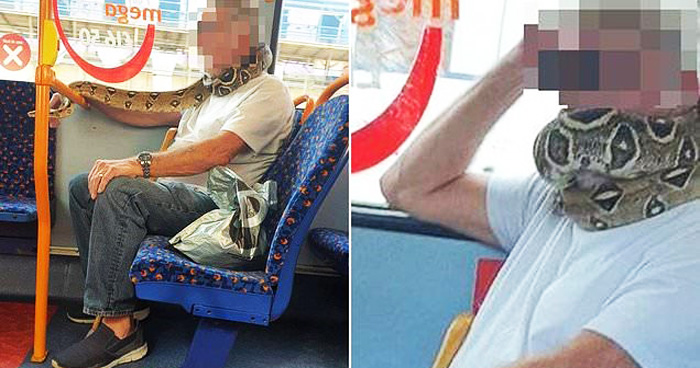 Experts have emerged warning aggressively against the use of snakes as face-covering instead of a face mask. This came after a man took government social distancing and the compulsory use of masks to a whole new level. The man, who boarded from the Swinton to Manchester service at Salford Precinct was spotted on the bus wearing a huge snake around his face, of which the incident has gone viral on social media pages.

An unidentified man, who boarded the Swinton to Manchester service at Salford Precinct was spotted wearing a huge snake as face-covering instead of a face mask

A lot of commuters on the bus were left startled as the man removed the snake around his neck and allowed it to wrap around the handrails. Fellow bus riders dubbed the scene as extremely entertaining. A passenger, who requested not to be identified said she originally felt the man was putting on a funky mask, only to see it slithering over the handrails.

The 46-year-old woman considered the incident really hilarious and acknowledged that the reptile didn’t bother any other passengers. ‘No one literally batted an eyelid.’ The woman said. Expectedly, the viral stunt was criticized by local officials as they urged that snakes aren’t a replacement for face masks. Accordingly, pictures from the scene revealed the man wasn’t putting on a mask under the huge snake.

‘Governments rules clearly reads that this needn’t be a surgical mask and that commuters can make their own or wear something healthy and comfortable, including bandana and scarf. While a small degree of interpretation can be applied to this, it doesn’t extend to the use of snakeskin, most especially when a snake is attached.’ The spokesman for Transport for Greater Manchester said. Nevertheless, the issue of face-covering on public transport is presently compulsory, except for individuals who are exempted due to health, disability, or age-related problems.

Man Wears Huge Snake Instead Of A Face Mask On Bus