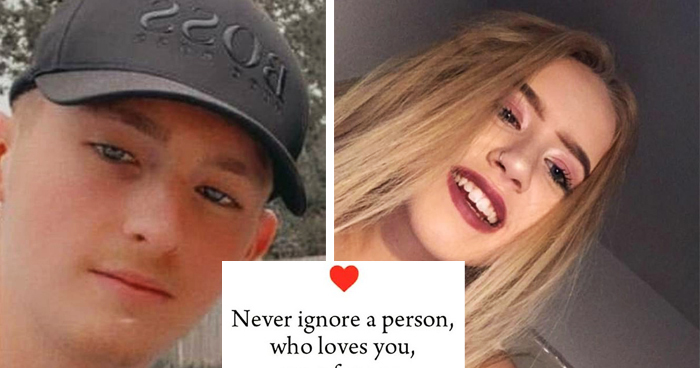 Heartbreaking Final Post Of Boy, 18, Who Found Dead A Year After His GF Was Struck By Bus

A teenager was found dead, 18 months after his girlfriend was fatally hit by a bus. James Fincher, 18, posted an emotional message on Facebook days before he was reported missing from an address in Coalville on Saturday.

Earlier this week, Mr Fincher had posted a photo with a caption: ‘Never ignore a person who loves you, cares for you and misses you, because one day you might wake up and realise you lost the moon while counting the stars.’

Fincher posted an emotional message on Facebook days before his demise

His late girlfriend Sian Ellis,, was tragically struck by a bus at the end of school day on January 28 last year.
The fatal incident occurred outside King Edward VII College in Coalville, and she succumbed to her injuries.

Mr Fincher set up an online petition in bid to make the road where Sian was killed safer for schoolchildren.

February this year, he posted on Facebook saying: ‘Over a year on since my girlfriend Sian Ellis was tragically and so unexpectedly hit by a bus crossing over the current ‘crossing’ that isn’t a controlled one.’
He added: ‘The more signatures it gets, the higher the possibility of it being recognised and something a lot safer finally being put in place.’

Yesterday evening, The Leicestershire police confirmed location of An unidentified body found in the area of Meadow Lane, Coalville. The body has been assumed that of Mr. Fincher as the police awaits formal identification to take place.

Leicestershire Police said: ‘Officers searching for an 18-year-old man reported missing have found a body.
‘James Fincher was reported missing from an address in Coalville at 3.55pm yesterday (Saturday).
‘A body was found in the area of Meadow Lane, Coalville yesterday evening. Formal identification is yet to take place.

‘The death is not believed to be suspicious and a file is being prepared for HM Coroner. Thank you to everyone who shared our appeal and provided information.’

‘You have struggled so much these past 18 months, I just wish there was something more we could have done to help you.
‘I will miss you so much James. Sleep tight you beautiful soul.’