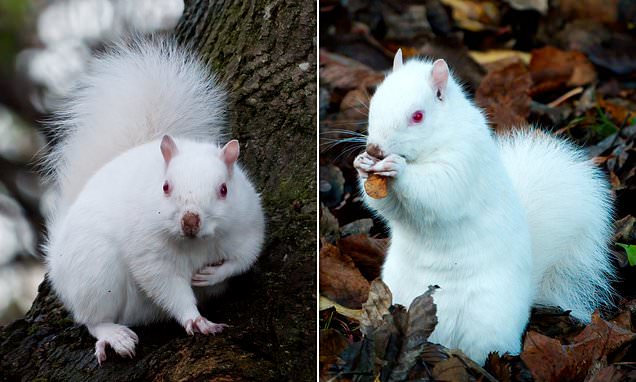 Rare in nature, albino animals have been seen across the globe. These unique creatures suffer an absence of melanin, resulting in a pale skin tone and red/pink eyes compared to other members. Specifically, the odds of a squirrel being born white is believed to about one in 100,000, so when one finds its way into your garden, it’s worth reaching out for a camera.

51-Year-Old Richard Waugh of Edinburgh, who was recently left thrilled, has taken photos of a rare albino animal outside his home. The software developer had spotted the rare critter several times and even named it Lexy. Currently a regular visitor, Waugh has taken it upon himself to scatter nuts out for her.

‘I was going out to the shops, and she was running about. Luckily I had my camera with me. She appeared in a good mood and posed for a few photos. I reckon it’s about four years she has been hanging about here now. I have been lucky and seen her a lot.’ Waugh, the father-of-two, explained

Reportedly, the condition tends to affect around one in a million grey squirrels, with an estimated 50 believed to be residing in the United Kingdom. ‘I usually see her a couple of times a week. She seems to disappear for a couple of weeks at a time. It’s always good to see her when she’s back.’

‘I don’t feed her, but on rare occasions, I see her from the flat window and take down a few nuts to scatter about in the grass and trees. She cheeky and sometimes runs off with a couple of cheeky glances back from the trees; other times, it’s like she’s posing for photos. She gets on well with other wildlife. She’s fast on her feet, and she gives as good as she gets when she is getting bullied.’ Waugh added.

Nevertheless, the birth of an albino is regarded as a scary or auspicious event in some cultures. Numerous studies have revealed that some albino animals have difficulty in the wild and are prone to get bullied due to their sight and hearing problems.