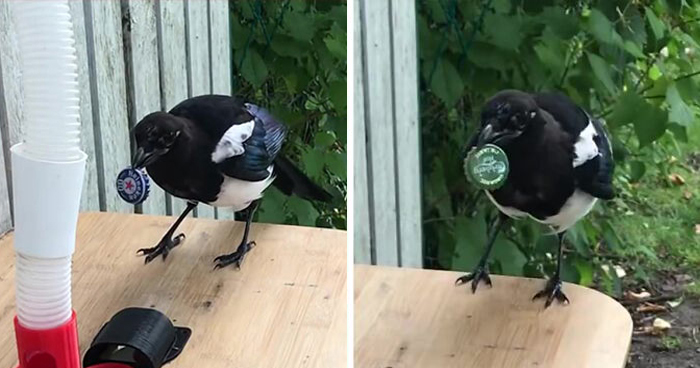 It’s fascinating to see animals learn to perform meaningful tricks. When we think about trick training, we usually think about dogs. Well, our furry friends aren’t the only animals that can learn tricks! Thanks to modern science, Magpies can be trained, and as Hans Forsberg proves, it just requires some patience and a dash of technology.

Hans Forsberg has lived alongside a pair of Magpies for as long as he remembers. The family of wild birds has been calling his backyard home and never bothered the host. One day, Hans noticed how the curious little critters started finagling with the complex locks on his outdoor lanterns.

Fascinated by their complex motor skills, he figured the birds could quite possibly carry out more meaningful tasks if well trained.

This was the birth of an ingenious idea to tap into the family of wild birds’ intelligence and motor skills. Hans built a machine from scratch that could train the friendly magpies to recycle bottle caps in exchange for food.

Being a unique idea, coming up with Designs was an uphill task since no one had tried it before, and there were certainly no plans on the internet on how to build one.

Hans relied on his mountain of experience to complete the project done in phases. First, he designed the dispenser, which was filled up with food like peanuts and animal kibble.

Whenever birds brought a piece of trash – in this case, a bottle cap that is deposited into a receptacle, one or two pieces of food was automatically dispensed as a reward. The tidbits are guided down through a tube and a funnel connected to a base with a small compartment that allows the bird to retrieve its reward easily.

The system’s main unit is a box containing a Raspberry Pi system with a camera to monitor everything. Besides, microelectronics and detectors hooked up below the machining process and triggered the dispensation of food.

Hans admits that the whole project was actually more complex than is alluded to here. It took him several years for his experiment to be fully operational. As it turns out, too, training magpies to pick up trash was harder than it sounded. Hans explained that he first had to feed the birds regularly to get them interested in the feeder.

Overtime Magpies Have Rid The Neighbourhood Of Bottle Caps

Even after the birds learned to make pitstops between their routines, it was long before he could completely earn their trust. The adult magpies posed the greatest challenge growing suspicious and cautious of anything, especially the rig was adjusted. Good thing, all of this changed when they had offspring. The chicks are braver in approaching the machine and partaking in this recycling scheme.

At this point, one chick has fully figured out how the system works and has been hard at work collecting bottle caps to trade for food. His siblings, however, are a mischievous lot, instead preferring to steal the rewards from underneath the beak of their hardworking sibling.

Hans thinks of improving his design by training the birds to pick up fallen fruit, cigarette butts, and other things in his backyard and the entire neighborhood. Through his ingenious invention, he hopes to instill a sense of responsibility in humans who litter the environment without remorse.