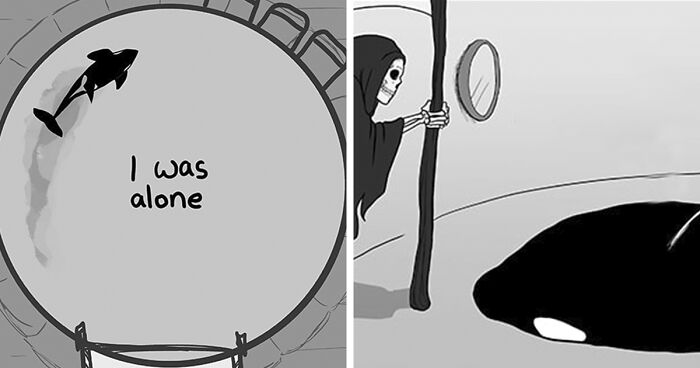 Jenny Jinya is an artist who is popular for her animal cruelty comics. Since the beginning, she wishes to spread information and increase awareness to prevent animal cruelty. Her first ever-popular comic was about the black cat, which was often ostracized due to superstitious beliefs about them bringing bad luck.

Jenny was inspired when her comics first went viral and was translated into multiple languages. She saw that as one way to reach even more audiences for the information that she wants to share with more people, for the animals she could save from making these comics.

She’s not done with her mission to help more animals. She’s made a lot about common house pets such as bunnies and fighting dogs. She now spreads her wings to bigger animals of the ocean: orcas.

A heart-wrenching story of a kidnapped Orca who spent his life in captivity.

Along with the comic, Jenny wrote, “The sorrow of a whale in captivity. If you were bored during the corona lockdowns, imagine how animals feel when they have to spend their whole lives like this.”

“Obviously there are amazing facilities that rescue and rehab, my comic isn’t aimed at those. There are great sanctuaries, but unfortunately, there are also some very greyish facilities,” Jenny updated later.

Henry the orca was ‘kidnapped’ and put in captivity for the rest of his life for entertainment. After he died, he was simply replaced by another poor animal to entertain people. His only friend was a poster of himself.

Orcas are intelligent creatures and their social needs can be likened to a human’s. When bred and kept in captivity, these gorgeous mammals can’t live beyond 30 years old in general. According to National Geographic wild orcas have been observed to live as long as 90 years old!

Orcas travel over 400 miles a day and dive as deep as 500 feet to find food and it’s part of their exercise. But captive orcas are often given space no longer than twice their body length. Imagine going in circles in a 4×4 room, won’t anyone go mad at that?

Unlike upbeat, positive, and funny comics that many artists prefer, Jenny focuses on putting poorly-treated animals in the spotlight. Whether that’s the bunnies who die from stress every day, or the black cats being treated like punching bags, Jenny continues to inspire (and make us all cry in ugly tears) with her comics.

One of her comics’ most prominent features is the kind grim reaper who seems to bring a shed of peace and closure to every dying animal. Instead of inducing hatred in them, they promise that the afterlife will be better.

The comments are beautiful.