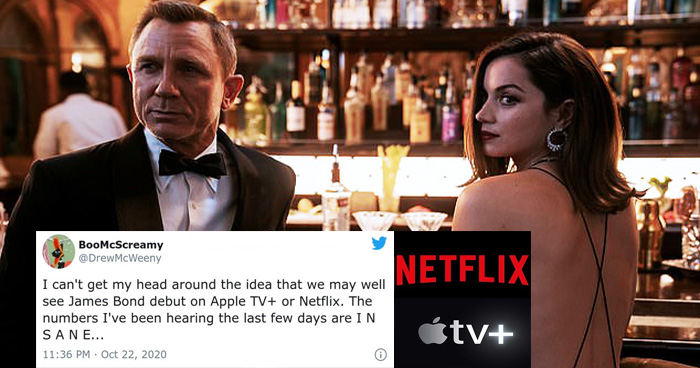 James Bond’s ‘No Time To Die’ was scheduled to open in April 2021. But with the pandemic hitting hard before that, the release date was pushed back until April 2021 the soonest. However, MGM is under pressure to quickly sell this way delayed movie of Daniel Craig’s last James Bond movie.

After months of silence on the movie’s update, film critic and screenwriter Drew McWeeny let people into a bit of information on the fate of ‘No Time To Die.’

The movie might be having its debut on streaming apps!

Drew wrote, “I can’t get my head around the idea that we may well see James Bond debut on Apple TV+ or Netflix.”

He added that there are insane numbers, and when asked to clarify by Eric Goldman, Drew said the movie is getting insane offers by the streaming giants. There is ‘serious pressure on MGM’ because 2020 sees one of the biggest crises for theatrical business. Drew, however, did not disclose how much was being offered.

Before this, ‘Mulan’ has already debuted Disney+ with an extra $30 cost that was not part of the subscription plan. ‘Coming 2 America’ has also decided to be sold for $120 million, and people can watch it on Amazon Prime this December.

The movie is James Bond’s 25th, which also marks Craig’s departure from the series. Billie Eilish sings the track ‘No Time To Die’ and becomes the youngest ever to sing for the movie.