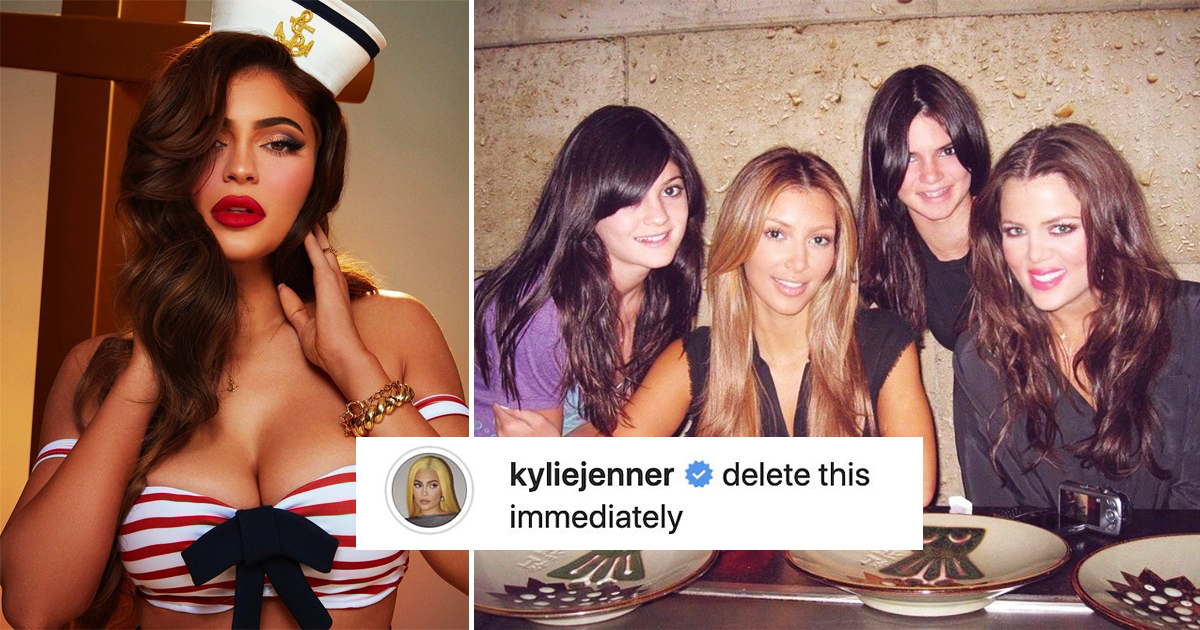 ‘Delete This Immediately’, Kylie Jenner wrote after Kim Kardashian shared an unrecognizable throwback photo, showing the lip kit diva as a geeky teen with bad bangs. 23-Year-Old Kylie instructed Kim Kardashian, 39 in the comment section, and in response, Kim jokingly asked: ‘Should I Diddy crop you out? Of which, Kylie reacted: @kimkardashian absolutely.

Stirring reactions, fans quickly flooded the comments section, stating how the beautiful sisters look different in the flashback photo as compared to how they appear now. Specifically, the picture seems to have been captured at a restaurant, where Kim and Khloe sat at the table while their half-sisters Kylie and Kendall Jenner posed beside them.

Kim, however, did caption the photo and it reads: ‘Babies.’ Kim appeared glam as she sat at the center of the table, donning honey-hued locks. Kylie rocked bangs and had a slight makeup on her face. Kendall had a sweet smile as posed in the back while Khloe was styled up with a head full of loose waves and a pink lip.

As seen in the photo, it’s clear that the shape of Khloe and Kendall’s noses appeared to have been modified and at the time the photo was taken, the beautiful sisters were all just starting to take the world of reality TV by storm, especially with their E! series – Keeping Up With The Kardashians. All four of the women including Sister Kourtney Kardashian did enjoy success in the spotlight and have over time become influential in the entertainment world.

Apart from their series, the sisters also pursued some careers, including Kylie building a makeup empire, Kendall – a full-time model, Kim – the founder of a cosmetics and shapewear line, and Khloe – the founder of a jean range. While Kourtney equally launched her wellness brand named Poosh, the sisters have, however, announced they will be concluding their KUWTK  series in 2021.

Of course, Kim Kardashian hilariously referenced P-Diddy for shamelessly cropping out Kylie and Kendall from his 2017 Met Gala photo