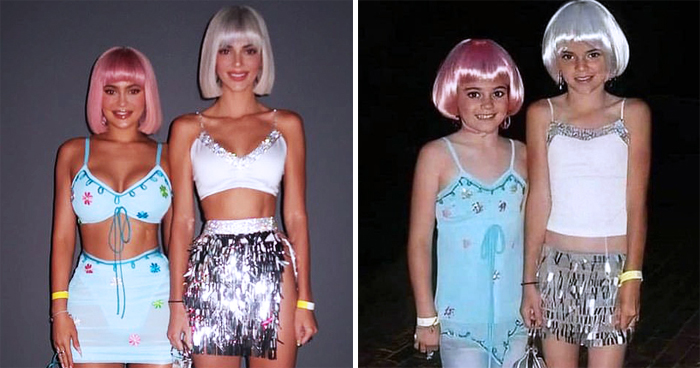 Kylie Jenner’s Halloween costumes got really cute this year as she posted them only on her story. The young business tycoon and her supermodel sister had dressed up as sexed-up versions of their childhood looks, and it’s pretty spot on.

The 23-year-old mom was in a light blue two-piece and had a pink wig just like when she was a kid. Kendall rocked a white top with a glimmering skirt and a high slit with a white wig for that ’90s party look.

Nailed it or nah?

Kylie went with flared leg warmers and a short skirt to replace the spaghetti dress she wore. Kendall’s was pretty similar except that her top was a bra just like Kylie’s. The floral patterns on Kylie’s was also to mimic her child’s version.

Kendall went as far as getting the exact same shoes, and they are also wearing matching yellow bracelets. But what was so striking was the smile they both gave. While standing next to each other, they gave the same ‘cheese’ for the camera as they did when they were kids.

Kylie also had a ‘Mighty Morphin Power Rangers‘ Halloween party with her girls.

She went with a superpower theme with her girls and Carter Gregory. Kylie was in a red skintight suit and all the other girls wore their respective colors. Carter was a black ranger.

With a Halloween spirit, the group shared a video of them transforming with accessories, copying the lines and actions of the show we used to watch as kids. Each costume have a similar theme, but were designed slightly different from each other.

She had blue wig on and her suit was a short dress with elbow-length gloves.

Sofia Villarroel was the yellow ranger.

With her side parted yellow wig, Sofia looked confident as she moved seductively in her suit.

In green suit was Yris Palmer.

A similarly successful entrepreneur, the 30-year-old donned her green suit as the green ranger. Yris owns Star Lash Extensions which was founded in 2014 and Kylie is one of her clients.