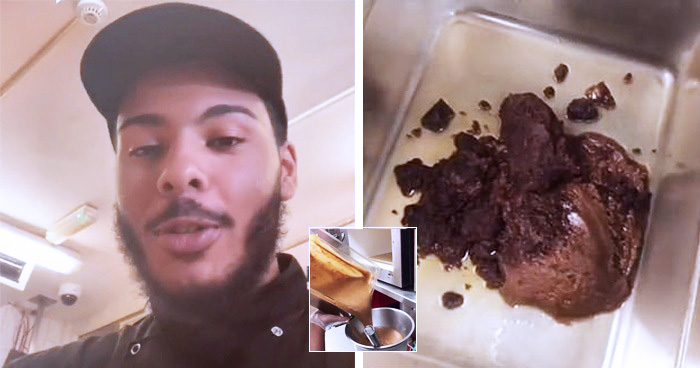 A KFC worker has revealed how the chain’s popular gravy is made much to the horror of fast-food fans. The former employee based in the UK posted a video on TikTok to show the secrets behind the much-loved sauce.

People commented on the TikTok video, calling it ‘grim’ and one said they would never buy the gravy again after seeing that it’s made from chicken bits that have fallen to the bottom of the fryer.

To create the sauce, TikTok user @cheddar4.7 began by pouring a jug of water onto what they call ‘crackling’ – claiming it is pieces of chicken which fall to the bottom of the fryer and go crispy.

They then add a sachet of gravy spices to the mixture and whisk everything thoroughly. The mixture is placed in the oven for 18 minutes and then whisked a final time before being poured through a sieve to remove large pieces.

The Liquid is Then Baked For 18 Minutes In The Oven

The tasty sauce is ready and then placed into the signature red-topped gravy pots and stored for up to six hours.

The recipe reveal, has been viewed more than 570,000 times, while drawing mixed reactions from viewers.

Some did not like how the special gravy was made; one of them even said that it is “grim.” Meanwhile, others seem okay with it, asking if those who were disgusted know how the gravy is typically made.

The staff member’s video even caught the attention of fellow KFC workers, who critiqued how they made the recipe: ‘The crackling is supposed to be left to let the oil drain out. That looks minging.’