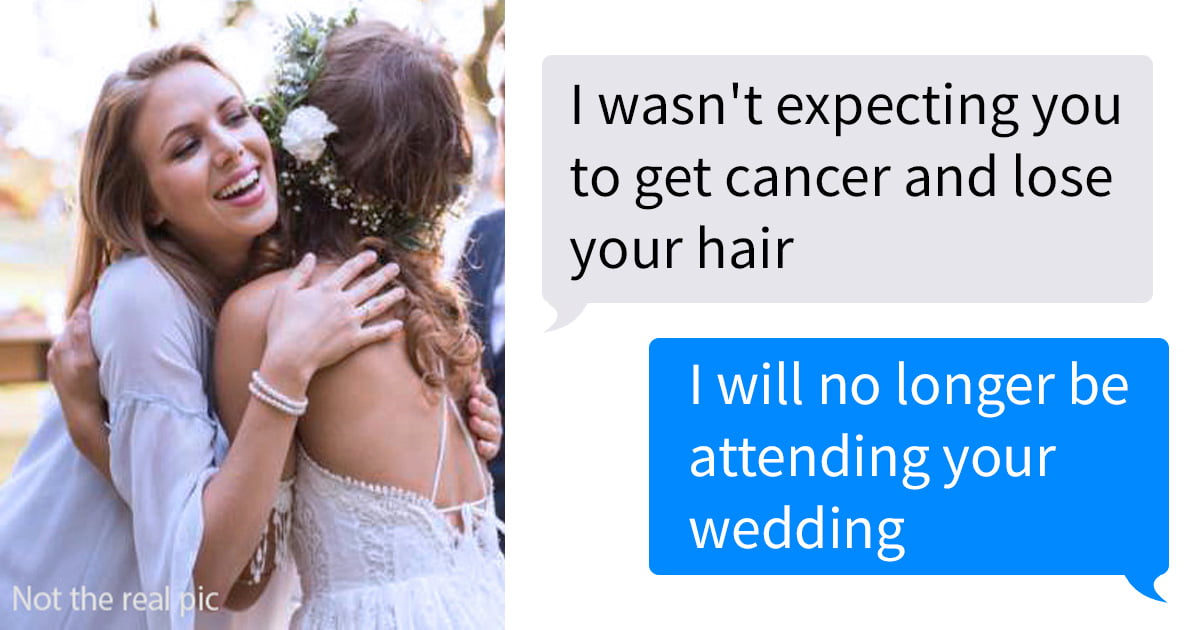 ‘I Wasn’t Expecting You To Get Cancer And Lose Your Hair:’ Bridezilla Loses A Bridesmaid And A Friend

Nothing can alter a beautiful moment into a horrible show quite like a Bridezilla. Reason: A lot of brides-to-be tend to lose all connection with reality when their dream day gets really close.

Just recently, a bride-to-be caused outrage online with her attitude. Realizing her bridesmaid got cancer, the Bridezilla began worrying about the several ways the condition would affect photos as well as the aesthetic of the wedding.

Confronting the douchebaggery via text message and telling her she won’t be attending the wedding, the bridesmaid equally used the opportunity to tell the bride what she thinks about her after revealing her true colors.

Shared on Imgur, users began congratulating the ex-bridesmaid on how she savagely handled the situation and also wished her luck with the cancer treatment.

This Bridezilla was disturbed her bridesmaid with cancer would ruin her wedding, so she asked for advice on how to deal with it

Unfortunately, It reached the woman in question, so she decided to tell the bride what she thinks of her true colors

The user who posted the screenshots, however, clarified they weren’t involved in the conflict themselves.

‘The bridesmaid called out the Bridezilla for hateful attitude by sharing their conversation on Facebook. I thought I was pretty desensitized to terrible people doing and uttering terrible things, but this one shocked me a little. So I took screenshots of the post and uploaded them here.’ the user explained.

The user added: ‘As far as it being fake, I can say with certainty that the bridesmaid does have cancer, but since the screenshots are not my texts, I have no way of proving whether the conversation transpired or not.’

Here’s However How People Reacted To The Story: