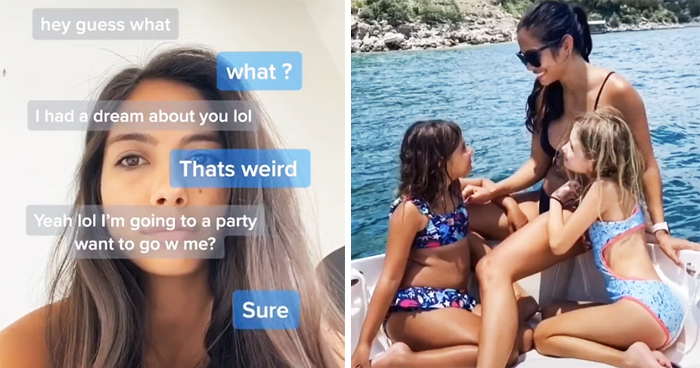 When most people condemn stories of people who cheat on their partners, the story of a certain mother-of-two had a rather beautiful ending. Or at least, it does looks great based on the TikTok videos and Instagram posts she regularly shares with her followers.

A 28-year-old mother, luxelilyh on TikTok, shared that she met her husband of 10 years through her then-boyfriend.

Her husband is now a housemate with her boyfriend from 10 years ago. On one pretty weird day, she was invited to a party after saying that he dreamed about her. But that one night fling became a one-night stand that resulted in her teen pregnancy at the age of 18.

After that night and finding out about her pregnancy, the two decided to keep and raise the baby!

It appears that her whole family and friends were also supporting her decision to keep the baby (except her pretty angry Asian mom). But all’s well now – Lily now has two beautiful girls and a loving husband!

She is also living a luxurious life with a Tesla and Audi and owning a lakefront house. The family often travels, as shown in the different vacation pictures she posts on her Instagram and the TikTok videos she made.

Storytime: we all know you are curious about what happened to her boyfriend after that.

When asked, the mother admitted that she did cheat on her then-boyfriend and said that 18-year-old her was ‘trash.’ She shared For one, a lot of us can admit that we are not proud of everything we have done as teenagers. We were so eager to be adults and made mistakes. She also wrote on her TikTok bio: ‘once a trash teenager, now a model citizen.’

She went, “Hi, I hooked up with your roommate. I’m sorry.” And his reaction was, “Streets.”

But she is now happy and proud to be a mom and wife.

She made a lot of bad choices. Even she herself said 10/10 would not recommend teen pregnancy. Audi and Tesla are not guaranteed.

She owned her past and is doing her best to be a good wife and mother for her family.

So, her past was not so awesome. But it turned out okay, and she has a happy life now. Mistakes were made, she admitted and apologized for those – fortunately, it was just an 18-year-old making your typical mistakes. It could have been so much worse.