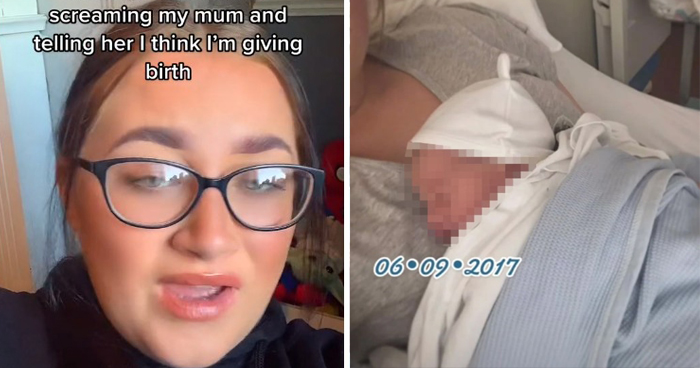 Ever heard of a pregnancy with no symptoms? Well, it does happen. Alexis recently took to the internet and explained how she had no idea she was pregnant until she gave birth on her living room floor just a day after going back to school. She experienced no symptoms of being pregnant and continued to have regular periods.

Alexis revealed how she unexpectedly gave birth to a child at 15 after experiencing a cryptic pregnancy.

Alexis, presently 19-years-old got the shock of her life when her mom spotted the baby’s head from under her uniform skirt. The teen mom, via a TikTok clip, explained she experienced a cryptic pregnancy when she was 15. However, she had grown suspicious after her mom revealed how she’d experienced heartburn when pregnant with her.

The teen, presently 19, had no typical pregnancy symptoms and even got a negative test result.

During her first day back at school, Alexis woke up with back pain, which later turned into labor.

Noticing the heartburn, Alexis took a pregnancy test, but it returned negative. But much later, she realized she was expecting. The teen mom said in the clip: “The test being negative and me still having regular periods and no more symptoms, goes back to school for my 1st day in [year] 11 on the 5th September.”

She realized she was giving birth when her mum saw the baby’s head under her uniform skirt.

“Having a perfectly OK day back to school. Getting ready for bed having a bit of back pain, so taking painkillers and thinking nothing of it.” Alexis added that she was up all night with back pain and found herself about to give birth hours later. Due to constant back pain, Alexis woke her mom and dad up at 6 am telling them about her not sleeping all night, but they had felt she was trying to get a day off.

Alexis welcomed her baby boy to the world on the 6th of September 2017.

“Going to the toilet before I set off to school and having the urge to push, me screaming [for] my mum and telling her I think I’m giving birth. My mum shouting at me to come downstairs, then looking up my skirt to check and going into shock when sees ahead, my dad running out of the door for pregnancy tests.” Alexis stated.

In another video, Alexis explained how she reached full term without experiencing any typical symptoms.

Alexis claimed she gave birth on the living room floor in an updated clip (above) and explained how she reached full term without noticing any typical pregnancy symptoms. So far, TikTokers who have since come across her clip were left stunned by her stale. A few others were left amused by her dad running out for pregnancy tests as his daughter was about to give birth.