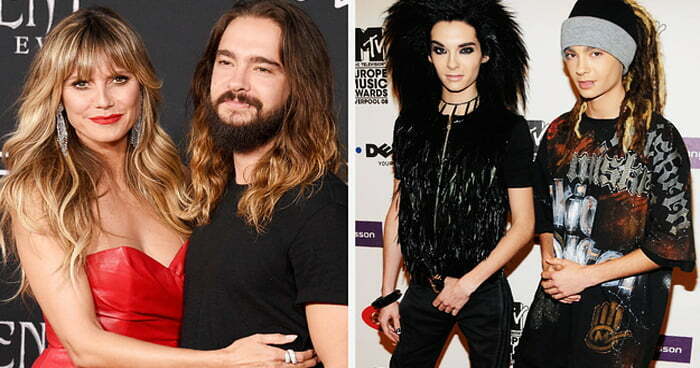 Heidi Klum’s New Husband Is One Of The Identical Twins From The Band Tokio Hotel!

Supermodel Heidi Klum is officially the wife of Tom Kaulitz earlier this year on February 22nd. And she has been enjoying her life as a married woman to the man of her choice. Speaking to People she said, “For the first time I feel like I have a real partner, someone to share everything with.”

But really, though, does anyone recognize who Tom Kaulitz is? Ssh! Some of you are probably hardcore fans of him back when he was more popular alongside his twin brother.

Still don’t know who it is?

Well, if you’ve known him before, this picture is going to shake your memory up. This is Tom Kaulitz about 15 years ago in a band. Yes, he’s Tom Kaulitz, the guitarist of Tokio Hotel, a German band.

This the whole band which consists of also drummer Gustav Schäfer and bassist Georg Listing. This 2000s band was the crush of many and is particularly popular in Germany.

The Kaulitzs twin are identical twin brothers, but they look absolutely different!

This is how they generally dress up like. They were popular teens girls were lusting over.

But look at them glow up today! The identical twins recently on their red carpet appearance for ‘Maleficent: Mistress of Evil’ premiere.

Today, Bill likes to hangout with his married brother and his wife. Heidi Klum is 46 years old and the reason why we couldn’t figure out the guy is probably because they had such an age gap that Heidi was already a highschool student when Tom was born.

Or maybe you’ve actually figured this out way back since you were a Tokio Hotel fan. But isn’t it incredible to witness the change on the 30-year-old guitarist?